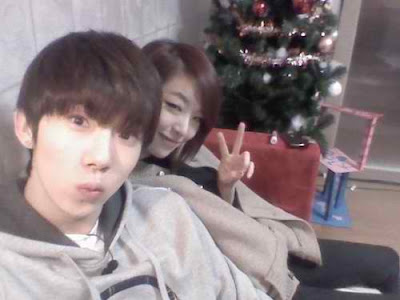 Recently on MBC We Got Married, 2AM was featured filming the MV for their new song ‘Even If I Die, I will not let you go’, Jo Kwon filmed a kiss scene with GaIn.

In front of his other 2AM members, Jo Kwon shows a strong manly image as the ‘beastly husband’ and called GaIn to the filming set. At first when GaIn heard about the kiss scene for the MV, she was doubtful but then she received the go-ahead and got all ready to be the female lead in the MV.

And with the 2AM members and even the MV director’s working together, the kiss scene was filmed.

The show is set to air on 6th February.

Tags: 2am, Ga in, Jo kwon, We got married
Share
Previous articleNext article