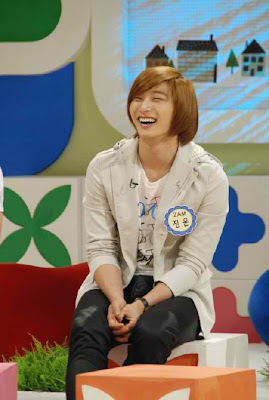 2AM's Jinwoon has expressed concerns about his smiling eyes.
On a recent recording of MBC's 'Classroom of Love,' Jinwoon revealed his concerns to teacher Jung Shiyeon.

Jinwoon, who is currently capturing the hearts of nuna fans with his charismatic smiling eyes, stated, "People misconceive me and think I'm some kind of player because of my smiling eyes."

In order to confirm Jinwoon's problem, the teacher asked to see his smiling eyes. Shin Bongsun sat beside him and observed, later stating, "He has eyes that look like he's going to confess to me soon."

The teacher gave a clear solution in order to solve the misconception along with a warning, stating, "If you smile with your eyes a lot, you'll get wrinkles faster so be careful."
May be taken out with full credits. You are not allowed add yourself to the credits nor edit the credits.
CREDITS : NEWSEN (SOURCE); hazyfiasco@2ONEDAY.COM (TRANS)
Tags: 2am, Jinwoon, News
Share
Previous articleNext article