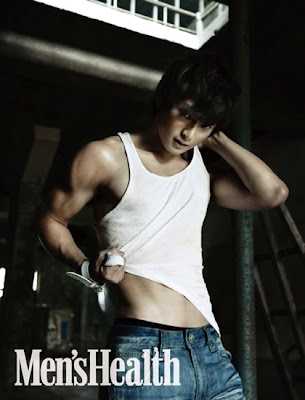 Remember on Strong Heart, where the dirt behind Nicole and Hara was unleashed? Nicole had previously scheduled a 'luncheon' with a close male friend, but was found out to be ditched by her own member, Hara. Rumours had gone about that the male friend in which they were referring to was actually 2AM's Jinwoon. He spoke about the gossip during the first episode of "Idol Maknae Rebellion"

The host, MC Yoo Saewoon brought up the situation asking him, "Isn't it true that you are who is being referred to in those rumors?" Jinwoon replied, "Its not me." He goes on to say "Its true that I am close with Nicole, but we're not in that kind of a relationship. And she wasn't referring to me in that story."

So there you have it folk, right from the man's mouth himself. No love triangle here, but still... Who would make a good couple? Jinwoon and Hara? or Jinwoon and Nicole? I'll let you be the judge. I'll say this, though, I wouldn't mind be caught in a rumour with him. Better yet, just being caught in a rum.. (get it? rum-our. rum=room. caught in a room with him.. alone...no? okay)
Tags: 2am, Goo hara, Jinwoon, Kara, Nicole
Share
Previous articleNext article