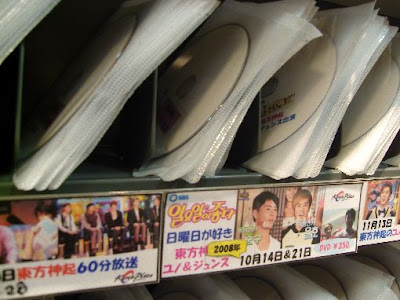 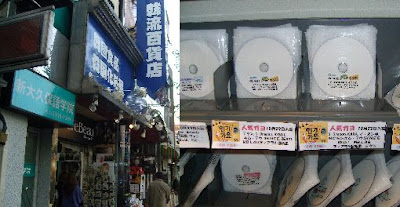 Although the Hallyu Wave has diminished somewhat in Japan, it has increased in diversity by moving its focus from drama-actors to Kpop-variety.

Asia Economics Newspaper went to Tokyo, Japan on the 4th to look through stores that dealt with the sale of Hallyu goods and found that the it has moved from the ‘Yonsama Central’ Hallyu Wave to one that encompasses the Korean culture in general.

The store that Japanese people who are very interested in the Korean culture go to is located in Shino Okubo in Tokyo. The store covers two blocks and has 8~10 shops that are thriving in business. The shops, that have names that remind one of Korea, sell the most current episodes of ‘Inkigayo’ and the recently released SS501 album as well.

Some stores resembled Korean goods markets as they sold everything from Korean cosmetics such as The Face Shop goods to Korean food.

The star at the top is obviously TVXQ. TVXQ, who has ranked first on the Oricon Weekly Charts six times already, covers most of the shops’ walls and adorns the shelves with their official DVDs and illegally taken photos. Also, cosmetics from the company three members of the group had invested in tempt the fans of TVXQ.

A representative of Shop H explained that, “As rumors of disbandment floated around, the TVXQ sales dropped a little, but they still boast the biggest influence. After TVXQ is Bae Young Jun.”

Representatives of these stores all said, “The interest in Korean pop has increased dramatically in Japan.” Theses shop owners put singers’ CDs and TV show appearances in more prominence than actors’ pictures and dramas and draw the shoppers’ attention. In Shop K, videos of Rain and TVXQ’s appearances on SBS’s ‘Family Outing’ are arranged in the center, and there is a special corner for SHINee’s recently released mini album. The background music of the store is Leessang’s ‘The Girl Who Could Not Break Up, The Guy Who Could Not Leave.’

A representative of Shop K said, “Around 400 people come to the store daily, and only 10 of them are Korean,” and “Recently, the CDs are selling very well. SHINee who recently released an album are very popular and some are asking for albums by rookie groups MBLAQ and BEAST. If only certain celebrities were in the spotlight in the past, it has expanded to many singers now such as Seotaiji, Leessang and Movement.”

The illegal goods that fill these shops should be dealt with by domestic entertainment agencies. Some of the shops make memo papers, cups, calendars, pens and key rings with the pictures of celebrities and sell these. Even though fans know that these are not official goods, they still buy them because they are attracted to such goods that hold the face of their favorite celebrities.

One representative of a domestic entertainment agency said, “No matter how much we try, the illegal market is not an easy problem to solve,” and “If we sue A to get rid of the problem, then B and C arise. There is no direct way to solve the problem except to curb the wants of the fans to buy these illegal goods.”