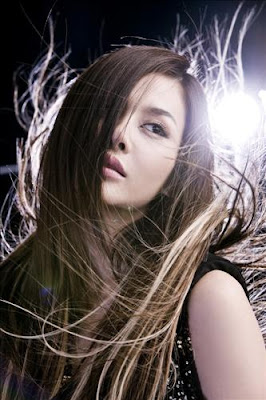 In a recent interview with Asia Economy Newspaper Ivy says, "Lee Hyori sunbae is someone whom I've liked very much since I was in the ninth grade. During my second album, when I was promoting 'Sonata of Temptation,' I was very surprised to see articles saying that I was her rival. It was because, to me she was a much higher existence. Just being able to do something with her is such an honor. I've only seen her performing from afar. I've never have the chance to see her up close."

Ivy added, "I've also been cursed at a lot because of her too. There was a significant amount of opinions saying 'how dare you even think about forming a rival with Lee Hyori.' I received a lot of stress from it. I worried a lot when I heard that Lee Hyori sunbae would do a comeback too. I was doing a comeback in a difficult time and to think that I was being mentioned along side with a big star like Lee Hyori sunbae was very burdensome."

"Ultimately, when I heard Lee Hyori sunbae wasn't doing a comeback I was able to breathe a sigh of relief. But I was also disappointed. I thought I would be able to work harder since the level of my nervousness would double. Nevertheless, thank you. Because of this sunbae I was able to raise my level to this point."

On an ending note she added, "I'll try my best to work harder to go along with sunbae. Until then, articles that keep attaching us together will be very burdensome. I would like to ask a favor of those reporters to please refrain from writing articles about us being rivals..."

During this interview, the reporter wrote that Ivy was very cheerful. Ivy said, "I'm so happy to stand in front of my fans and show them my bright side."