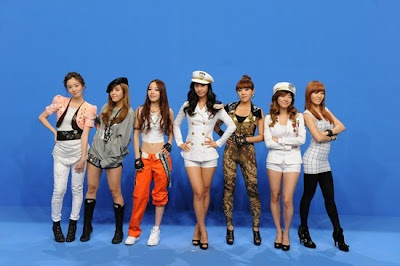 Seven girls coming from SNSD, KARA, 4minute, brown eyed girls, Tiara and Secret came to “Invincible Youth” trying to show how they can live by themselves on a countryside called “Cheong-chu-bul-pae” which means “the young never loses.” “Cheong-chu-bul-pae” began on the 23th on KBS2TV making a program rating of 9.8%. It was on 1st place at that broadcasting time verifying that girls are popular indeed.

But, one odd question remained. If this is a girl group gathering, where is 2NE1?

For those who dont know 2ne1 (im sure everyone knows), members of this girl group are CL, Minzi, Sandara and Bom who became really popular with debut album “Fire”.

Actually, Bigbang, 2ne1, Gummy, Jinusean, Se7en, Perry, Moogadang, YMGA etc are not on variety shows often except for Daesung who is doing “Famaily outing” as a fix contract. One PD from KBS mentioned that singers from YG have lots of confidence in singing and performing and they dont want their image ruined by doing some variety shows.

So there has been subtle troubles between broadcasting company and YG Entertainment. Particularly, last September after G-dragon has freely changed his schedule on a tv show of KBS which resulted to KBS boycotting YG singers.

YG said “we have our own rules which is “once a week” when it comes to doing variety show , it is not like we ignore and refuse.”