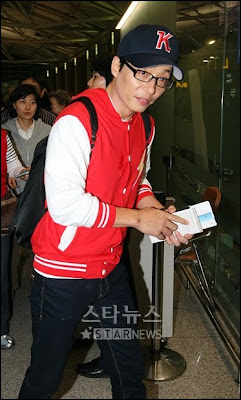 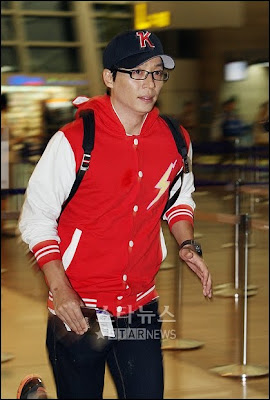 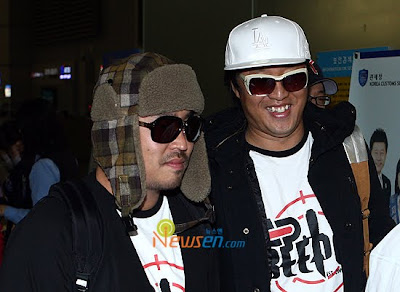 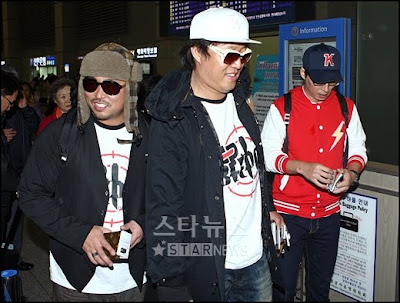 The Infinite Challenge crew are heading to New York as pics from them leaving Korea was just released. Members Yoo Jae Suk, Jung Jun Ha, Park Myung Soo, and Gil of Leessang departed from Incheon International Airport to New York. Their mission this time is to "make the world know about Korean food." However, there's also a side mission. They will also have a photo shoot for the 2010 calender.

No Hong Chul and Jung Hyun Dong had personal reasons so they will leave on the 27th.

Park Myung Soo said that "in New York, people jog without shirts on" and acted as if he was familiar with the area. Yoo Jae Suk then replied, "when we get to New York, you should really jog with your shirt off." Park Myung Soo answered back saying that "I will jog with no shirt on!"

The Infinite Challenge crew will be going to the JYP headquarters in NY and is planned to meet the Wonder Girls! However, no specific plans have been revealed.

They will spend a total of 10 days in New York and film 4 episodes before heading back home to Korea.

WELCOME TO AMERICA INFINITE CHALLENGE!
Park Myung Soo, hopefully we will get to see you run without a shirt on in the comfortable 59 degree New York weather.

Also, I would like to personally wish 2ONEDAY folks good luck. You guys have been doing great and we know you guys will make peoples jaws drop again. FIGHTING!