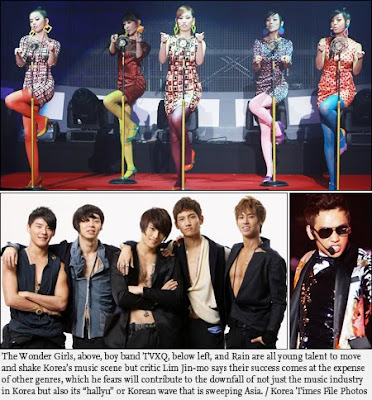 It may not be an exaggeration to say that today’s Korean pop charts are literally “occupied” by boy bands and girl groups such as the Wonder Girls and TVXQ, whose members are in their late teens and early 20s and dance to computerized hip-hop music.

This trend is making it harder than ever to watch sophisticated performances by middle-aged artists on the small screen particularly during primetime hours.

Lim Jin-mo, one of the country’s most influential music critics, said the unbalanced exposure of singers to the media will undermine K-pop’s international competitiveness and eventually devastate the country’s breeding ground for young musical prodigies.

“The Korean music industry is extremely unbalanced,” Lim said in an interview with The Korea Times. “Music producers, consumers and media are all liable for that.

“Producers try to make only money-making music and consumers are moved by songs produced in that fashion. Mass media positioning itself between the two have no choice but to be swayed by both.”

The journalist-turned-music expert said putting this situation back on track is one of the key roles and original duties of music critics, but added there are few experts versed well enough in music to carry out the role and, even worse, their concern has mostly gone unheeded.

“The utmost value of today’s music consumers in listening to music is `fun.’ They no longer seek any serious messages or meanings from music as people did back in the 1980s and `90s. I’d bet this fun-oriented appetite of listeners will continue for years to come,” he said.

The 50-year-old also lashed out at the media for its failure to be objective on the matter.

“The media’s liability for this is higher,” he said. “Its basic role should be standing balanced in the middle, as reporters do, and providing people with opportunities to learn things, in an unbiased way. But it has failed to do so and even mislead the public.”

He said undue capitalism smearing the media industry as a primary reason for the malfunction.

“If they take negative positions toward a certain singer or band enjoying its heyday, their management agency might impose a sort of sanction on them, resulting in damaging their bottom line. Negative reporting is something inevitable for the media. However, I think nobody willingly runs the risk of doing so at the cost of sustaining financial losses.”

Lim described music as “social air” that helps people share contemporary sentiment and thoughts with others. “But now it is no more than just a means to make money,” he said.

Capitalizing on the wave, some K-pop stars, such as Rain, the Wonder Girls and BoA, have extended their activities to other Asian countries and even the United States, the world’s largest music market.

Many deem hallyu as a huge success, touting it as a key promoter of Korean culture outside the borders. But Lim said it’s still too early to judge it a success.

“The Korean wave is a very proud thing in that it has brought Korean culture outside the border and made it international,” he said. “But I think it still falls short of showing the genuine face of our culture. In other words, what is projected through hallyu is Korean culture sophistically modified to be familiar to foreigners.”

To break into the American market, Korean musicians, including Rain and BoA, have armed themselves with fluent English-language skills and English-version songs, and have had some success, he said. “But their ultimate goal there should be standing on stage with Korean-version songs with a very Korean sound, which would be the completion of the Korean wave,” he said.

His assessment of the “corporate-style management agencies” in Korea was mixed.

Such agencies have played a key role in introducing what some call the “star-making system,” in which agencies pick up talented youngsters, train them for years and then “hit the market” with their songs, looks and even character doctored to be friendly to the market and consumers.

Among influential agencies using such a system are SM Entertainment, JYP and YG Entertainment. These agencies have produced most of the K-pop idols, including Rain, the Wonder Girls, BoA, Girls’ Generation, TVXQ and so on.

“The Korean wave is largely attributable to the star-making system,” he said. “Such a systematized process helped Korean agencies form partnerships and do business with overseas agencies, resulting in giving additional impetus to the Korean wave,” Lim added.

“But it also brought about a lack of `real’ musical artists.

“With financial backup and strategic marketing becoming crucial to appealing to the market, a growing number of talented people are doing their job for the favor of their agencies rather than sticking to their own way,” he said. “Real musicians are endangered, while those only in pursuit of popularity are cropping up.”