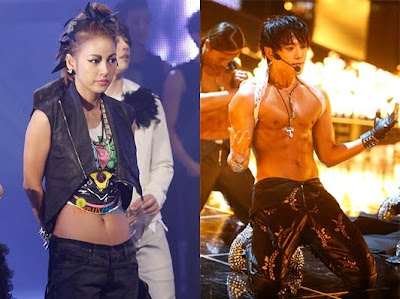 Rain and Lee Hyori talked about them promoting at the same time for seven years.

On the May 17 episode of Kim Won Hee Yoo's Rockman, both Lee Hyori and Rain appeared as guests.

Rain said that He first had his acting debut by 2003 and his activities has been really good for the past 7 years. Also, Lee Hyori had her solo debut by 2003 promoting her solo album. The two has been promoting at the same time after that.

Although some would say that there is "rivalry" between the two, the two drives away from the issue of them being rival's because they are quite friends in real life and there are no rivalries.

Rain had his acting debut in 2003 with the drama "Sang Doo! Let's Go To School" and also releasing his second mini album "How to Avoid The Sun" while Lee Hyori had her solo debut in 2003 with her first album and hit song "10 minutes".

By 2006, Lee Hyori released her follow up album "Dark Angel" by the first half of the year and Rain followed on the second half releasing his fourth album "Rain's World"

Also, by 2008 Lee Hyori made a comeback after a long break with her third album "HyorisH" and Rain also made his comeback with his fifth album "Rainism".

After two years, Rain and Lee Hyori both made a comeback with "Back to the basics" and "H-Logic" on April 2010.