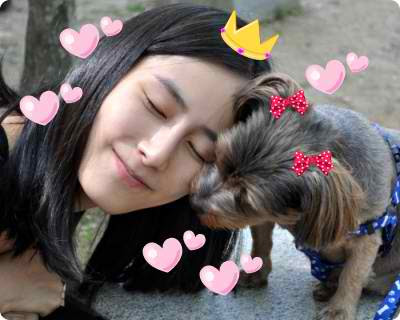 Actress Hwang Inyeong shared an embrace with 2PM's Ok Taecyeon, earning them the prickly glare of the netizens.

Hwang Inyeong, who made an appearance in SBS 'Strong Heart' stated that, "I want to date before it's too late," adding, "My ideal type, that I've been looking for all along is nearby."

She pointed out Ok Taecyeon and stated, "My heart almost stopped when I was watching 2PM's performance at home and Taecyeon ripped his clothes to reveal his abs." She went on to confess, "When you're in your 30's you like rough men."

She also brought out a 2PM CD that Taecyeon had autographed stating, "I'm Taecyeon's fan, so I asked him for an autograph on the CD I bought. I was never this nervous on TV, but today, I am. I can now die happy."

Hwang Inyeong also stated, "My wish is to hug Taecyeon." She bought the envy of many of the guests by embracing Taecyeon with ulterior motives(?)

After the broadcast, some fans left bashing comments on her mini hompy (cyworld).
May be taken out with full credits. You are not allowed add yourself to the credits nor edit the credits.
CREDITS : Newshankuk (SOURCE) ; ANGma@2ONEDAY.COM (TRANS)
*Some netizens just can't stop bashing someone if it's related to their idol(s)
Follow me on twitter
Tags: 2pm, Hwang inyeong, Taecyeon
Share
Previous articleNext article