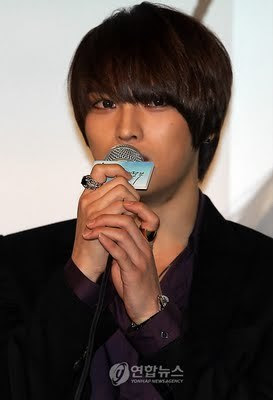 An idol group singer. A joint production between Korea and Japan. Fantasy-romance. The combination of these three elements may make viewers feel unsure about film "Postman to Heaven" at first glance, but it would be too early to make any judgements just yet.

Director Lee Byung-hun, actress Han Hyo-joo and boy band TVXQ member Hero Jaejoong turned up at a press screening on Monday for "Postman", the second of the telecinema projects where a Korean director, Japanese screenwriter and Hallyu stars have gotten together to produce a total of eight films.

In "Postman", Hero plays Jae-joon, the postman from heaven, who delivers letters living people have written to their loved ones in heaven. He comes across Hana, played by Han, who writes a letter full of resentment to the dead man that she used to love, reveals his presence to her, and the two start writing responses to the letters for the saddened people who are left in the real world.

Needless to say, the co-stars of the film are top stars in their respective fields of the entertainment industry and screenwriter Eriko Kitagawa, nicknamed 'the god of love stories' for her various hit dramas including "Long Vacation" and "Sora Kara Furu Ichioku no Hoshi", turns the fairy tale into a fairy tale-like romance. Director Lee backs up the fantasy even further with his beautiful imagery, as he displayed in dramas "Sorry, I Love You" and "Snow Queen";

Below are excerpts from the press conference held after a screening for the film, set for release on November 11, which waited a year for its showing to the world.

Q: We heard that Erika Kitakawa started writing "Postman to Heaven" with Hero in mind. Why do you think that is? And is there anything the writer or director requested for in particular to you Hero?
Director Lee Hyung-min (Lee): Since the telecinemas are a joint project between Korea and Japan, we thought Hero who is widely known as a member of TVXQ, would be good for the part considering the fact the movie would be shown in Japan too. I actually didn't even know who TVXQ was but I now know the names of all the members. (laugh) And during filming, I realized why the screenwriter wanted Hero to play the part. We were in shoot for over a term of four weeks and during that time, Hero would perform in Asia but come to set right after he got off the plane to practice and shoot his scenes. His acting was good although it was his first time and he would have been done a better job if he had been able to just focus on the movie.

Q: Were you able to feel any differences between Korean scripts and one written by a Japanese writer?
Han Hyo-joo (Han): When I first got the script, there were parts I didn't quite understand or lines that didn't make sense to me. There were also parts I wasn't too sure about so in the beginning, I got the original script in Japanese and looked it over alongside the one in Korean and studied both. I ended up just going with how I felt but it was good because it was a different experience.
Hero Jaejoong (Hero): I got the Korean script first which had been translated from Japanese but I didn't really understand it because it was my first time acting and I didn't know how I should analyze it. But director Lee said he wanted to go with the lines that the writer had originally written rather than change them so he helped me to study and practice many of the lines which had difficult nuances.
Lee: These two are good at Japanese but I don't know the language. So when it became difficult for me to catch the emotions the script was trying to display at certain points, we all studied and worked together on those scenes.

Q: There were some slightly corny lines toward the latter half of the movie. How did it feel and did you make any bloopers doing the scenes?
Hero: In the end of the film, there is a scene where we say things such as 'Haven't we met somewhere before?' and I'll respond, "In my dreams?" I felt a bit weird saying that. It would've felt less awkward if I had been able to do it in Japanese. And in my mind, I made a lot of bloopers. (laugh)
Han: I made a lot of bloopers in my mind too. (laugh) So it didn't seem as awkward when I was actually acting out the lines but there are some parts are a bit corny now that I look back on them. (laugh)

Q: Director Lee, the imagery you had shown us so far in your previous works, shone again in "Postman". Is there anything you payed close attention to in particular?
Lee: Japanese people have dealt a lot with the topics such as life and death and love stories between the living and the dead in their movies. But Korean people aren't used to the genre so I had to change some of the script after consulting with the writer. And I because of those parts which may seem awkward to the Korean audience, I felt that it should be more attractive in terms of imagery compared to any other film and got together the best staff in broadcasting, filming and television commercials. I had the TV commercial team work on the filming and lights, the broadcasting team on the editing and producing and the movie staff on the art while paying a lot of attention to mise-en-scene or images. There are parts where the film may seem Japanese but the younger generation these days seem to take in such props, designs and colors quite naturally. I wanted to bring this out as best as I could.

Q: Was there any pressure in having to act with Hero who is a newcomer?
Han: It's true that I was very pressured but it gradually lessened and had completely disappeared by the time we were done shooting. I actually had fun while in shoot because Hero's staff and fans were very considerate towards me. As his acting partner, I would have to say he very quick. His reactions toward my acting was very good and he adjusted pretty quickly so I think he has much potential for the future.

Q: Are you considering to continue to act? And you're currently in a dispute with your agency SM Entertainment over your contract so we are wondering if you plan to continuing to use the name they gave you -- Hero Jaejoong?
Hero: I'm not the one who put the name "Hero Jaejoong" in the poster so I'm not so sure about that part. (laugh) And I can't tell you as of now, whether I'll continue acting or not but I think it would be most right to say, like I have been saying since my debut, that I will try my best if given the opportunity.

Q: What is a new sort of joy you felt while acting, different from going up on stage to give performances like you have been doing so for the past several years?
Hero: They joy I feel on stage performing versus acting are very different but it took me a long time to catch what it was. The director had actually told me many times to think of acting the same as going up on stage to put on a performance. And he took singer Rain as an example, saying he had become a better performer on stage after taking on acting.

Q: What advice did you receive from other members of your group, including U-Know Yunho who recently starred in MBC TV series "No Limit"? Or since you had actually filmed your movie before U-Know went into shoot, had you given him any advice?
Hero: They didn't give me any advice. (laugh) We were all extremely busy back when I was filming "Postman" because we were promoting our fourth album. We also had concerts so everyone was exhausted but U-Know and Max Changmin showed a lot of interest in the atmosphere on set and told me to work hard. And U-Know is such a hard-worker that I wasn't in a position to give him advice on acting. He never even tells us when he's having a hard time or he is sick so I just watched how he did, believing he would do well.

10: Would you like to say a word to your fans who are worried over the legal dispute?
Hero: It was actually hard for me even having to show up publicly during such times. But I thought that I really should attend this screening event. I had a very hard time while we were in shoot for this a year ago but I was also very happy during that time and became very close to the director, actors and staff. I myself had been looking forward to its release for the past year so I am in hard times but I thought that I should turn up to congratulate the film. I know a lot of fans must be worried but I hope this movie can be reassurance to their hearts at least a bit.