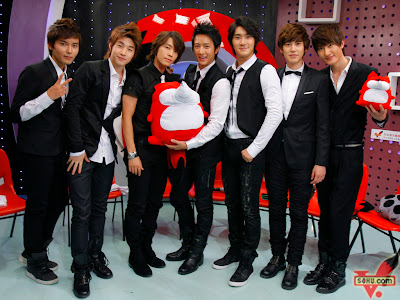 When asked about their past training in Korea on a certain entertainment programme on Enlight Media, both Hankyung and Henry said that the experience was extremely scary to them at that point in time and it is not inappropriate to call it a “boot camp (lit. ‘devil training’)”. Additionally, the language barrier that they faced made life even more difficult for them.

Henry shared that when he first arrived in Korea, he was completely unable to understand the menus in restaurants. As he only knew how to say “I’d like a bowl of chicken soup,” in Korean, he could only eat that same dish in that same restaurant. He did so for two whole months, learning Korean as he drank the soup. His revelation amused the other members in the group.

Chinese member Hankyung also had such a (training) experience, saying that although he did not drink chicken soup for as long a time (as Henry did), his training experience was indeed rather tough. As a foreigner on unfamiliar land, everything he did required a lot of time. However, he soon changed his stance, saying, “Looking back on the experience I had, it actually wasn’t unbearable. If it weren’t for that experience, I’d not have the results that I have achieved today, and no one would know me. So I am very thankful for that seemingly difficult period of time.” Hankyung’s words brought on a lasting applause from the crew members off-stage.

The host then told Super Junior M about the three trainees of Enlight Media who are bound for training in Korea and asked them to teach the trainees on where to get Korean delicacies. In response to that request, Hankyung said in a serious tone that having the chance to receive such training in Korea is a good opportunity for youngsters. He explained that Korea is particularly strict in the aspect of nurturing celebrities, hence one should not think about how to enjoy himself in Korea, but focus on learning and picking up skills instead. He even jokingly said that to protect the young trainees, the members will not disclose their ‘strategies’ to Korean delicacies.