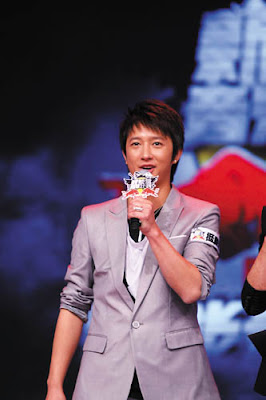 Yesterday , Hangeng, who hasn’t yet ended his lawsuit case appeared on the opening ceremony of ‘New Power Music Plan’, organized by Enlight Media Group. Yuan Weiren said that they are now helping Hangeng for his new album. According to what the reporters had known, Hangeng will have his new career after leaving the band. The new album that Yuan Weiren had mention is expected to be released by two months later from now.

The ‘New Power Music Plan’ is aiming the new singers, and during July to November they will record the creations of those new singers, and combined into 5 albums. 5 experienced musicians, Zhang Yadong, Yuan Weiren, Gao Xiaosong, Paul Wong and Xiao Ke are going to be the producer of these 5 albums.

Other than Zhang Yadong, (Ziao Ke wasn’t’ available), 3 other musicians came to the opening ceremony yesterday, together with Hangeng who was the guest. Having Hangeng standing in the middle, it really feels like a large group of people protecting and supporting a new star. Seeing the other experienced musicians, Hangeng was very humble, always saying that he’s ‘excited’. As the lawsuit hasn’t yet finished, Hangeng spoke very carefully and formally, he mentioned that he will be joining this singer selection, hoping that his new songs could be recorded in those 5 albums. He even said “I’m very greedy, and if I have a chance, I wanted these 5 musicians help me to produce an album. Yuan Weiren who was standing aside suddenly said that he was preparing the new album for Hangeng, and had already received half of the works. Meanwhile, Gao Xiaosong is discussing the contract terms with Hangeng.

Because of the oppression and exploitation, Hangeng decided to sue his litigation in the Korea Court, hoping to end the contract with SME, and then Hangeng will have a different path as Super Junior, not attending the concerts as well as any public activities of their new album.

As the law case hasn’t yet ended, Hangeng didn’t accept any of the interviews, than Yuan Weiren, Gao Xiaosong became the reporters target, asking them about Hangeng’s news. Gao Xiaosong was apparently feeling a bit annoyed, he said “I hope the newspaper tomorrow won’t be talking about ‘me and Yuan Weiren have made a new album for Hangeng’, actually I was just compromising the cooperation with Hangeng , and those are related to dancing and singing, not the new album.” According to the reporters, Hangeng hadn’t yet signed contract with the recording company, but he will after the law case has ended. The new album that Yuan Weiren had mentioned is expected to be released two months later.