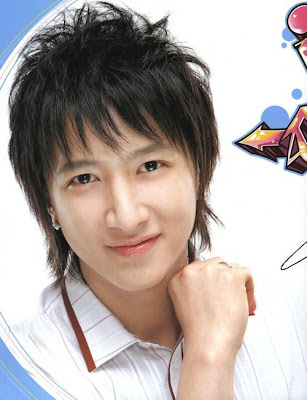 Super Group "SJ-M" member Hangeng's got some scandal involving him. When Hangeng flew to Japan, to record HunanTV's [Bravely Moving Forward], he was accused by the media of showing affection for "Let's Go Watch Meteor Rain" 's main actress, Zheng Shuang. In the show he gave her a hug. Yesterday, the director of the show has responded to this scandal. He said "Because of this movement, and received a scandal, I don't understand why."

During this time, Hangeng and Li Xiao Lu's Older Sister-Younger Brother love is being spread like wildfire. And this time, he also received a scandal with Zheng Shuang. We've been told that, Hangeng not only helped Zheng Shuang wipe her tears, he also hugged her, and even yelled to her "Just pretend, everything's for our kids!" Besides recording the show, Hangeng and Zheng Shuang were also interacting after the show, they seemed friendly.

Because of this, the director that recently came back from Japan did not understand "At that time, Zheng Shuang was gonna go challenge the world's biggest jumping machine, and Zheng Shuang's scared of heights, and she even cried. Hangeng, being Zheng Shuang's partner in the show, showed everyone how a man's supposed to protect a girl, and comforted her, convinced her, hugged her, and helped her get rid of her fear.

The director said, "At the scene, all the staff and fans were touched by Hangeng's kind-hearted behavior. To receive a scandal by this behavior is really unbelievable. The director also told the reporters, when recording in Japan, Hangeng successfully completed the challenge, and received 30 Million Yuan for charity, to build a "Hangeng Hope School".