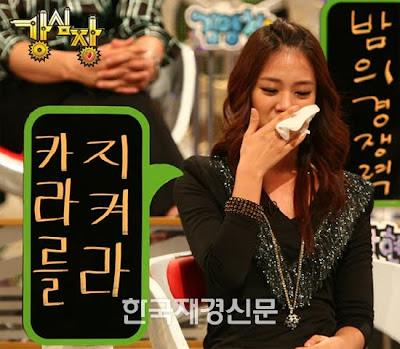 ara's Han Seungyeon finally talked about their tough and unpopular period of hardships, bringing her to tears.

On a recent filming of SBS's , Han Seungyeon talk was accompanied by tears, which brought the rest of the studio into tears as well.

That day, Seungyeon's topic was "Protect Kara!" which made everyone in the studio curious about what it meant. When her talk time came, Han Seungyeon said, "When I'm on broadcasts because I'm always smiling, many people only know this bright side of me." They had never revealed Kara's behind the story during their early promotion days on a broadcast before, so her willingness to talk about it surprised everyone.

Seungyeon and Kara had been together since their trainee days, but then one of the members was reported to be leaving the group, which caused a severe shock, throwing Kara into a questionable period as to what would happen to the group. She began by confessing about this crisis period which brought her to tears.

At the time there was so much frustration and pent-up tears that there were rumors that they wouldn't be able to successfully go on.

"From there on out, I made a promise to myself to do whatever was necessary to protect Kara, to make Kara's name known," she revealed.

This will be broadcasted on the 3rd.