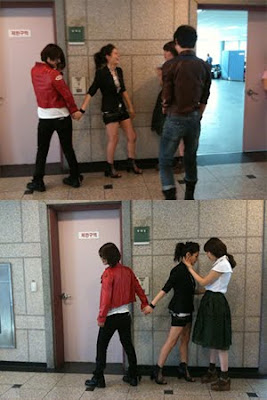 On May 20, backstage, Gummy and the rest of the singers had their own version of the break up scene in 8eights music video as well as their performance. They took pictures and released it online.

Even Lee Hyun and Baek Chan were coaching them on how to properly do the poses, the scene was between a love triangle and gummy was in a triangle between Rin and Young Ji. Their parody has caught a lot of interest from netizens.

Looks like the singers are friends and are having a little fun backstage from their schedule. Fans commented on how cute the parody was and very unexpected from these singers.

Meanwhile, 8eight is doing well with "Farewell is coming" while Gummy is also promoting her song "As a man"