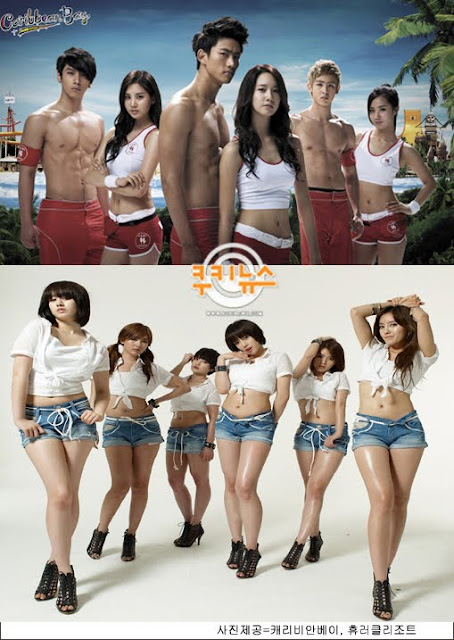 Until now, it's been proven that idol groups really could be the best thing that ever happened to Chicken Advertising. SNSD for Goobne Chicken, the Wonder Girls for BBQChicken, KARA for COB Chicken, Secret for 9ers Chicken, and T-ara for NeNe Chicken with Yoo Jaesuk. However, as summer approaches, numerous girl groups from this list will be advertising for water park ads..

UEE and Gahee of After School were both proposed to do a campaign for Ocean World. In the past, Lee Hyori have advertised for Ocean World and these two young idols have been chosen to step in to the sexy model charm that the Ocean World Ads are known for.

Also just recently, SNSD along with 2PM are endorsing Carribean Bay. From these campaigns, it's been said that it looked like the Korean Bay Watch.

Now the next challenge is on T-ara. Just on the 14th, T-ara started shooting for their Waterpark Scandal Campaign. "Cute, sporty, sexy, that's what we're going for. Since T-ara's very versatile and unique, we felt that they would be the idol group that can represent the campaign the best" said the resort managers.