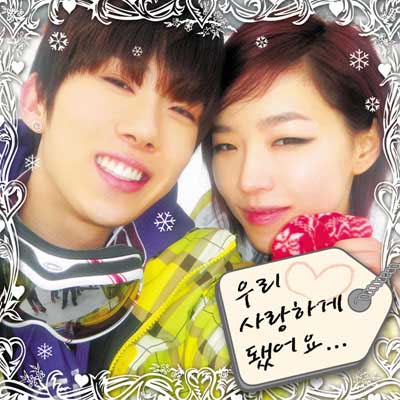 Gain of the Brown Eyed Girls has confessed that her "heart flutters" when she sees her virtual husband 2AM Jo Kwon.

The two people are currently appearing as a virtual couple in MBC's "We Got Married Season 2" and were named the "Adam Couple" by viewers due to their short heights.

2AM'S Seulong participated in a recording of "Sebawki" on the afternoon of the 4th at Gyungkido Ilsan MBC Dream Center and called Gain during the "DajjaGojja Speed Quiz" corner.

Gain said about Seulong "He is a friend that I get along with well. He is the only member that Jo Kwon is not jealous of" and asked "Is Kwon there right now?" she asked suspiciously, making the participants laugh.

"Have you thought of Seulong as a man?" asked MC Park Misun and Gain answered "I've been good friends with Seulong for a long time so he doesn't make my heart flutter at all and only Jo Kwon does" which grabbed the attention of the participants.

May be taken out with full credits. You are not allowed add yourself to the credits nor edit the credits.
SOURCE: Yahoo!Korea (SOURCE) ; shmesmx3@2ONEDAY.COM (TRANS)
Tags: 2am, Brown eyed girls, Ga in, Jo kwon, News
Share
Previous articleNext article