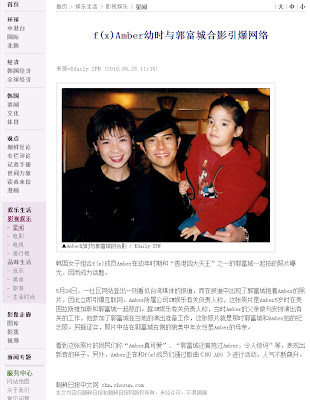 Korean girl group f(x)'s member Amber took a childhood picture with one of "Hong Kong's Four Heavenly Kings," becoming a major topic since it was exposed.
On May 24th, a forum website posted what looks like a Taiwanese report/article. In the article, there is a picture of Aaron Kwok appearing to be holding Amber and completely set off the internet community. A spokesperson for Amber's record company, SM Entertainment, has stated that the picture was taken when Amber was 5-years old at Las Vegas with Aaron Kwok.
According to the spokesperson, Amber's father was doing work related to Aaron Kwok's performance there at the time, and this picture of Aaron Kwok and Amber was taken as a memorabilia/commemorative photo. It was also confirmed that the beautiful, middle-aged women standing to the right of Aaron Kwok is Amber's mother.The netizens who saw this picture have said that "Amber was so cute," "Aaron Kwok held Amber before, how surprising," and so on, expressing curiosity.
Also, Amber is currently with her f(x) members doing "NU ABO" promotional activities, increasing their soaring popularity non-stop.