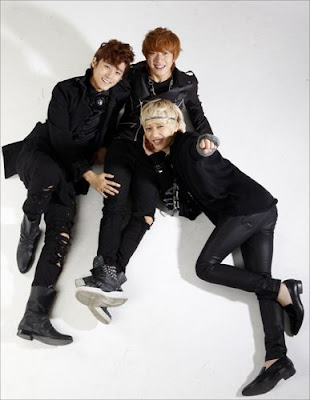 An interview was conducted with members of FT Island’s sub-unit group, FT.triple, consisting of Lee Jaejin, Choi Minhwan and Choi Jonghoon. They started the interview by revealing the resolution of the band. The 3 members are currently doing promotions for their “Two Date” album, which is part of the “Double Date” 2CD album that was released earlier on 26th October. FT Island’s vocal Lee Hongki is currently filming the drama “You’re Beautiful“, while member Song Seunghyun is active in various variety programmes. FT.triple revealed to Sports Donga on the day following the release of their album that, “Don’t think of us as a separate group of FT Island. Think of us as an extension group instead.”

The biggest difference between FT Island and FT.triple is the vocal. Lee Jaejin, who has been playing the bass all along, will be holding the vocal position in FT.triple. He will also be the main vocal of FT Island until Lee Hongki returns to the band after his drama filming. Thereafter, he will return to his original bass position. He also made lots of improvement in his vocal abilities after participating in the musical “Sonagi“.

“When FT Island was formed in the beginning, I practised for both the bass and vocal. However, after Lee Hongki joins the band, I feel that more practice is needed for me. Lee Hongki has a sentimental, sad and husky voice, while mine has a sturdy feel. Our vocal styles are totally different.” (Lee Jaejin)

It’s only natural that the band’s vocal receives the most attention. So this is a chance for the 3 members to showcase their talent since they have not been receiving much attention for the past period. Choi Jonghoon who has been playing the guitar, will be in charge of playing the piano in FT.triple.

“We think that it’s a good chance for us to showcase our talent. It is our sub-unit group’s aim to bring across a different image of the band. I have been playing the piano since young, but after joining FT Island, I switched to playing the guitar.” (Choi Jonghoon)

Their title song is “Love Letter“. It is a song that expresses the worries and concern for an ex-lover, written in the form of a letter. Lee Jaejin’s vocals for the song is soothing. Other songs in the album includes “멀리멀리“, which has a light and also “꼬집어봐도“, a song with smooth melody, showcasing Lee Jaejin’s singing abilities.

Though feeling worried and excited at the same time, the members said that the feeling of standing on stage now is just like that of a newcomer. “Rather than seeing it as a competition with other singers, we just want to do our best in our own performance.” (Choi Minhwan)