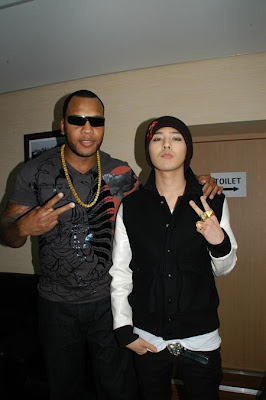 U.S. hip-hop artist Flo Rida informed his fans via Twitter that he put on a "great show" in Korea with K-pop idol G-Dragon over the weekend.

Flo Rida posted several "tweets," or messages on popular social networking and micro-blogging service Twitter, during the time he was in Seoul for the concert, where he performed two shows on May 21 and 22.

G-Dragon, the leader of popular Korean boy band Big Bang, had appeared on the show as a guest performer on the latter night.

The American rapper appeared satisfied with the Seoul gig and spoke highly of G-Dragon. In a post dated May 23, he wrote that he performed a "great show with G-Dragon from Korea" and also sent out "Much love to my fans in Korea."

The joint performance by the two musicians put to bed all the negative criticism that had dogged G-Dragon last year, when he had been accused of plagiarizing Flo Rida's song "Right Round" in his hit single "Heartbreaker."

Fans are responding favorably to the Seoul concert as well -- one fan commented "You and GD killed the stage!!" while another wrote "GD is a beast," meaning they both gave fantastic performances.

Julia Beverly, editor of U.S. hip-hop magazine Ozone who accompanied the American singer to Korea, even posted a picture of Flo Rida and G-Dragon together prior to their performance, on her Twitter page.

Flo Rida, whose real name is Tramar Dillard, shot to international stardom with the success of his debut single "Low," which spent eleven weeks at No. 1 on the Billboard singles chart.

His sophomore album "R.O.O.T.S." featured the single "Right Round," which became an instant hit and sold over 636,00 copies in one week.