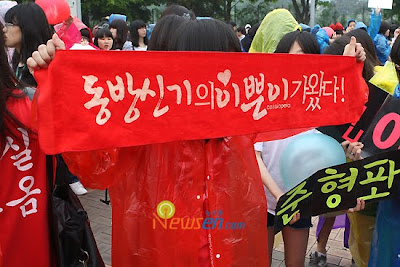 There were still idol's from the music industry who were absent that fans called for during the 2010 Dream Concert.

May 22, 7:00pm at the Seoul World Cup Stadium, there was a rare occasion that occured.

While 2pm was performing, fans were cheering for 2pm, but something louder even took the whole area, there were audiences who were screaming for "Park Jaebeom's" name. Everytime it was "Im going to be ok without u" part of the song, they would scream "Park Jaebeom".

There were audiences who thought that it was a little harsh for the people who did so to 2pm one commented, "2pm members seems to shrink too much".

Also, due to the ongoing contract dispute with the 3 members of DBSK, DBSK wasn't present during the dream concert but the fans still made an effort to make their presence felt.

There were fans who were determined who were waving red balloons and glow sticks with DBSK balloons and proud to show that "Cassiopeia" DBSK fan club are still going strong. They chanted DBSK songs during the concert like "mirotic".

Also, While Super Junior was performing with 10 members, due to that Kibum Hankyung and Kangin were absent due to their own reasons, fans still shouted enthusiastically all 13 members of Super Junior.

Meanwhile, Also, Sunmi who left the group because she want's to focus on her studies, her spot was filled in by new member hyerim. When Hyerim went on stage, there were fans cheering for Sunmi but there were also those who were cheering for HyeRim and hanged banners to support her.

Despite the absence of some idol's. The fans still managed to make their presence felt during the 2010 Dream Concert.