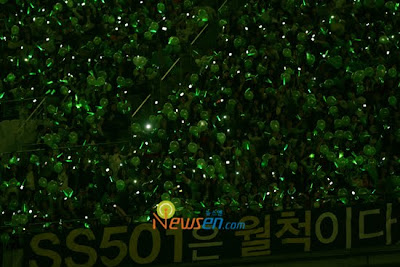 Fans of SS501 sent an ocean of green lights and balloons in support to SS501 during their performance. They supported the group especially Kim Hyun Joong that despite his injuries not being fully healed yet he still went on stage and performed with SS501.

The fans felt the pain of the leader as well as the sacrifice the group had to make and cheered on their favorite idol group. SS501 had to delay the release of their album because Kim Hyun Joong had to rest for 2 weeks, they cannot leave him out.

Fans were touched that even though Kim Hyun Joong was in pain during the performance, he still gave his best and SS501 performed an emotional ballad for their fans since it has been month's since they were able to meet up with their fans.