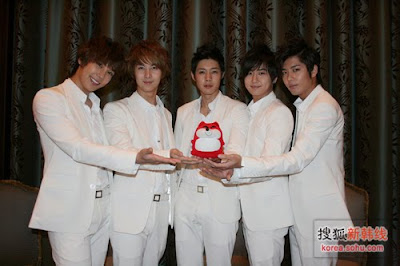 On the afternoon of the 12th of November, SS501 appeared together as one in Shanghai, in preparation of their concert in Hongkou Soccer Stadium on the 14th. After the official news conference, SS501 accepted an exclusive interview with Sohu. Five years after their debut, the five members have matured, but it is evident that they are still as playful as ever, seen through their antics during the interview itself.

SOHU: First, say hi to your fans in China via the cameras of Sohu!

SOHU: This is the second time that you guys are holding a concert in China. Compared to the first time, how does it feel? And are there any special wishes you guys have for the upcoming concert as well?

Hyunjoong: This time we’re going to compensate our fans, by showing them what we could not last time. Plus, this will be the first time we’re holding an outdoor concert, so please support us with your greatest passion.

SOHU: Your newly released mini album REBIRTH has had good results in Korea, congratulations. Fans are very concerned about the next studio album, when will it be planned for release?

Hyunjoong: We too hope for it to be released soon, and in order to let it be fulfilled we’ll work even harder. (Other four members clap)

SOHU: Do you have any hopes of getting awards at the year-end award ceremonies? Currently, SS501 ranks first for the Overseas Popularity Award on the MAMA website, how do you guys feel about that?

Jungmin: Ah, because this award is based on votes by the fans, and it also is about popularity overseas, I believe that our Chinese fans have contributed a lot to the results so thank you. Please continue supporting us, and of course, our newest mini album REBIRTH as well!

SOHU: Now that the members have started to try out lyrics writing and song composing, have you guys ever thought of releasing an album that is fully produced by the group?

Hyungjoon: Up til now, all of us have had the experience of writing our own songs. This time in REBIRTH, the five of us have also written a set of lyrics specially for our fans. So you never know, our next album might just be full of songs by us; lyrics, melody and all. We are singer, song writer, SS501! (SS501 is pronounced in a Chinese accent, and Jungmin laughs non-stop at the side)

SOHU: It’s been five years since your debut, what has been the biggest gain and losses so far?

Hyunjoong: Five years isn’t a long period of time, but neither is it a short period of time. In this timespan, we’ve had many international and Korean fans, and our popularity has been “up~down~up~”, that kinda thing. All of this is actually rather interesting, because until now, SS501 finally has its own colour and specialties. From now on, we’ll repay everyone with music that has the colour of SS501.

SOHU: Then what plans are in store for the next five years?

SOHU: Even though leader has reverted from “Yoon Jihoo” back to “Kim Hyunjoong”, will SS501, and not only just leader, attempt to do dramas if good productions come knocking? Also, what kind of roles do the members want to try their hands at?

Kyujong: The five of us have actually been preparing , Jungmin has honed his acting skills via his musical, and Hyungjoon’s drama will be broadcasted soon. The five of us concentrate fully on our individual activities, and Hyunjoong-hyung should have new dramas soon. So please do not just support our music projects, but also give your support to our other activities such as acting, DJ-ing and hosting.

(Kyujong passes the mic to Youngsaeng: “What role does Youngsaeng-goon want to try out the most?”)

Youngsaeng: I’m ok with any role, (Kyujong imitates a boxer at the side), the character that Hyunjoong plays in Boys Over Flowers is a role I’d like to try out too.

SOHU: Holding your concert at the same time as your Korean activities, will you guys be able to handle it?

Hyunjoong: Our group’s herbivourous guy, the person who is most concerned about his health, will answer the question: Jungmin.
Jungmin: The members have been consistent in maintaining our energy levels. Like me, I’ll eat all kinds of ginseng in order to replenish my energy. And in my opinion, your attitude is the most important when you face jobs of high stress levels. One should not accumulate too much stress, that isn’t good for your health… (Suddenly shouts at the other members) YOU’RE TOO NOISY!! (Turns back to the camera and smiles) This helps in distressing too!

(Hyungjoon is stunned because of the sudden shout; Hyunjoong passes the mic to him)

Hyungjoon: Let’s hurry on to the next question.

SOHU: What other activities are planned for now?

(Hyungjoon passes the mic to Hyunjoong, but both Hyunjoong and Jungmin are adamant that Hyungjoon answer the question. A friendly round of mic passing soon begins)

Hyungjoon: We’ll continue to work hard, and after a year and seven months; the five of us will once again commence on our group activities up til the end of the year, along with our Asia tour. We’ll face everyone with our best sides, and we wish that everyone will support REBIRTH, our newest mini album. SS501~ (Everyone claps)

SOHU: Finally, please say a few words to your fans in China!

Jungmin: 朋友，帮帮我？帮帮忙! Friend, help me? Help me!! (Unsure of his pronounciation, he looks to the translator for help)
Hyungjoon: Thank you!
Hyunjoong: Hi everyone! (He’s speaking in Shanghainese)
Youngsaeng: I love you~
Kyujong: No problem~ (Laughs non-stop)