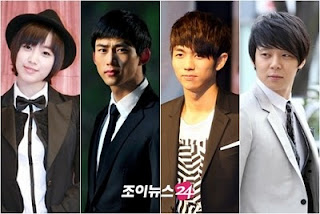 The entrance of idols in the drama scene is not new and idol group members can be found acting in almost all of the dramas currently airing. Even a new word ‘Actingdol’ (Acting+Idol) has been created to label this group of idol singers.

However, viewers have conflicting opinions on these new ‘Actingdols’.

Some say that they feel uncomfortable watching idols receive parts in dramas due to nothing but their ‘star quality’ although their acting skills have not been properly inspected. Others say that netizens place harsher standards on idols due to the prejudices and stereotypes that already exist.

Recently, TVXQ’s Micky Yoochun became a ‘hot potato’ online when he was set to play the leading role on ‘SungKyunKwan Scandal’. It was neck and neck between those who worried that, “Without any acting experience, how will Micky Yoochun be able to properly act out his role?” and those who said, “It isn’t right to criticize him even before he has begun.”
The idol label and the fans’ distrust and expectations become a burden and homework for idols who pursue the field of acting. But the only people who can complete this homework are the idols themselves.

Some have pointed out that idols must prepare well so that they can confidently stand shoulder to shoulder with the professionals instead of rushing into things and they must hold responsibility for the drama they appear in.

Also, people should not just view these idols in a negative and critical light but open up to them. One wonders why people can’t take an ‘open approach’ to the situation, in which the faults are pointed out but the potential is complimented.