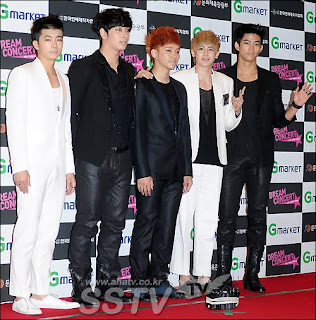 2PM attended Dream Concert 2010 on the 22nd at 7 PM. 2PM sang Without U and Don't Stop Can't Stop. Like any other artist, as soon as they entered the stage, they were met with chants of 2PM which was later mixed with chants of 2PM's terminated member, Park Jaebum.

When 2PM stood on stage at the last Dream Concert before the final termination of Park Jaebum, chants of Park Jaebum had taken over the stadium but the fans were clearly in support of both 2PM and Park Jaebum.

However, this time it is different. The minute the 2PM members entered the stage, screams of Park Jaebum chants exploded from the audience, completely silencing the screams in support of 2PM. This was the first time where one artist was able to bring about such a divided reaction from the audience. It seemed as if some of the other fandoms were more in support of 2PM than their actual fans.

One fan stated, "I know what it's like for them to be waiting for Park Jaebum but it seemed a bit harsh."

Regardless, 2PM persisted and finished their stage as Ok Taecyeon continued to MC the concert.


May be taken out with full credits. You are not allowed add yourself to the credits nor edit the credits.
CREDITS : SPORTS CHOSUN (SOURCE); hazyfiasco@2ONEDAY.COM (TRANS)
Tags: Jae beom, News
Share
Previous articleNext article