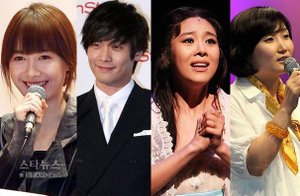 Gu Hye-sun, Daniel Choi, Ok Joo-hyun, Park Kyung-lim
The lineup is firming up for the upcoming drama series The Musical, with two members of its main cast confirmed and two others having made verbal agreements. The first two are Gu Hye-sun (Boys Before Flowers) and Daniel Choi (High Kick Through the Roof), while the latter two are musical actress Ok Joo-hyun and MC Park Kyung-lim.

This comes after Gu and Choi attended a musical together in April, which drew some notice and turns out to have been one of Ok’s performances in the musical Monte Cristo. The Musical has only been vaguely described as a “musical drama” that tells the story of the dreams and loves of musical actors.

A source explained that in addition to these name stars, the drama will feature talented new faces. The lead actors will attend an overnight MT (membership training) and workshop on May 27-28, which will be a bonding activity as well as a chance for them to discuss the finer points of the plot and characters.

This seems like a decent lineup, given the musical talents of those involved (I’m not sure of Daniel Choi, but I’m assuming he’s got a musical side). As you probably know, Gu Hye-sun intended to debut as a singer and has put out an album of new age music that she composed. Furthermore, her directorial effort Magic, which releases next month, is set in a school school for the arts with students who study music. After gaining her start as a pop singer of girl group Fin.K.L. in the ’90s, Ok Joo-hyun has successfully reinvented herself as a musical actress. If her casting is finalized, this would be her drama debut, though she has already accrued some stage experience in productions of Chicago, Cats and Monte Cristo. Park Kyung-lim had a successful run starring in a musical production of Hairspray last year.

Although The Musical doesn’t yet have a broadcast station or an airdate, it is looking to premiere in the latter half of the year on KBS. However, I’m greatly curious to see how this fares with another musical-themed drama, What’s Up, also in the works. What’s Up also has yet to find a broadcaster but comes with a lot of buzz for its star writer (Song Ji-nah) and cast of rising stars (Im Joo-hwan, Daesung, Im Joo-eun).

The drama called "The Musical" has somewhat confirmed its cast line-up and is about to turn its motor on to start the production.
On May 24th, an affiliate of "The Musical" revealed that Goo Hye Sun and Choi Daniel have both confirmed to act in the drama. Ok Joo Hyun as well as Park Kyung Lim have verbally promised to participated in the drama. Choi Daniel and Goo Hye Sun have gained attention already on May 4th for their appearance as spectators at the musical show called 'Monte Cristo' starring Ok Joo Hyun and Shin Sung Rok at the Universal Art Center in Seoul.

After Goo Hye Sun and Choi Daniel were confirmed, Ok Joo Hyun was strongly influenced to appear in the drama. "The Musical" would be OK's debut drama. Ok joo Hyun is already successful in the world of musicals so it is very fitting for her to take a role in a musical drama. Since the end of last year, Park Kyung Lim made a successful lead in "Hair Spray" musical and has actively came forward to participate in the musical drama.

The affiliate of "The Musical" also reported that most of the leading actors have been confirmed for the drama. Along with the star-level actors, few new actors identified already as talented will partake in the drama. The leading actors will attend a MT and Workshop sessions on May 27 through 28 at the Kyung Gi Do In Geun. The purpose of the sessions is to promote friendship among the actors and to discuss the details about the drama.