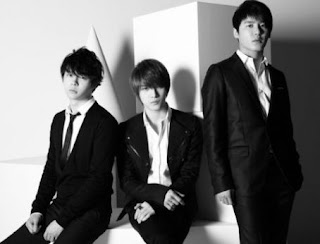 Ahead of their Japanese fanmeeting concert coming June, it is known that Dong Bang Shin Ki Xiah JunSu, Micky YooChun and Hero JaeJoong will promote under the nickname of ‘J.Y.J’.

Previously an official announcement came that the group will discontinue their activities as Dong Bang Shin Ki after the 3 members’ discord with their agency SM Entertainment. And coming 5th June, the 3 members will hold a large scale fanmeeting concert in Tokyo Dome, and they will be holding the concert as ‘J.Y.J’ made up of the initials of each of the members.

A representative of the 3 members revealed on 19th May, “Ahead of their event, AVEX has decided to go with ‘J.Y.J’ for the logo for the concert. Even though they will promote as J.Y.J for the concert, it is not their confirmed group name. We will not know the group name until AVEX releases an official announcement.”

Meanwhile, there will be 4 fanmeeting concert performances for their upcoming event.