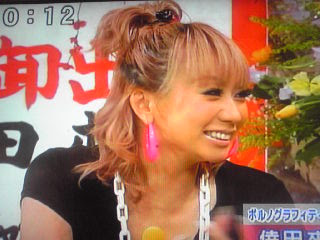 Kumi Koda appeared in today’s “Waratte Iitomo!”
There was a flower stand from Tohoshinki~
Tamori-san (T/N: A very famous comedian. He has been the MC for this famous variety program for more than 25 years) took his time to say, “OH! TOHOSHINKI!”

My heart skipped a beat by just that, lol.

Tohoshinki appeared in this program 2 years ago…

I would like to see their cute moments once again.

The guest for “Waratte Iitomo! Telephone Shocking” (broadcasted on Feb 5) was Kumi Kouda.
The flowers (T/N: celebrating her appearance) were sent from…