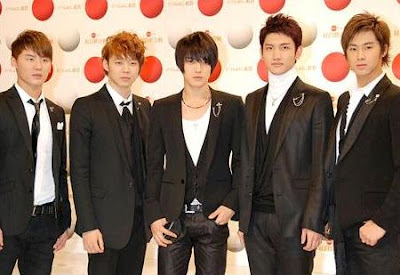 Confirmed: TVXQ will participate in the concert at Shenzhen

Before the ruling, all TVXQ members had signed as a confirmation that they will be participating in the Shenzhen Concert. This event will definitely not be affected by the conclusion of the lawsuit. Kim Jaejoong, Jung Yunho, Park Yoochun, Kim Junsu and Shim Changmin had all participated.

Regarding Kim Jaejoong’s, Park Yoochun’s, and Kim Junsu’s ability to choose their own activities, we have contacted the relevant person in-charge in SM Entertainment; the responsible person said that all five members of TVXQ have deep feelings towards Chinese Cassiopeia. The five of them could not bear to hurt their fans’ feelings. "Last 2nd of October, at the Shanghai Concert encore stage, the whole audience (Cassiopeia) was holding “Miduhyo” cloths to express their support, and this scene had touched everyone; TVXQ is not an exception. All five members will participate in the Shenzhen Encore Concert."

Since the Shenzhen stop was decided by both sides before the verdict had been signed, the performance will not be affected, regardless of the outcome of the court's decision. TVXQ will bring a full line-up scheduled appearance in Shenzhen to the Chinese fans, bringing the most exciting concert encore.

Regarding the rumours indicating that there would still be Chengdu, Guangzhou and Nanjing stops after Shenzhen, the company stated that "TVXQ’s concert in Shenzhen to be held on the 21st is definitely the 3rd Asia Tour final station. They will perform a complete line-up, and paint a successful closing for the 3rd Asia Tour."