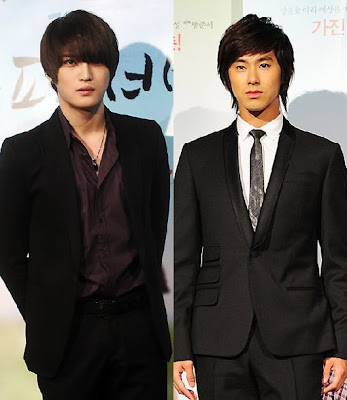 TVXQ's U-Know Yunho and YoungWoong Jaejoong have been garnering attention for showing their support for each other at their individual press conferences after the dispute began.

The two people's friendship seemed not to have been disturbed in any way by the legal dispute with agency SM Entertainment. In fact, they both seemed to be trying hard not to accidentally bring harm to the other.

YoungWoong Jaejoong attended the press conference of 'Postman of Heaven' at 4:30 pm at the CGV at Wangship-li in Seoul on the 9th and said, "It was hard for me to decide to show my face at this press conference which is my first official outing since the trial," and "But I wanted to attend the press conference because this production was something I worked hard on a year ago."

He also said, "When I was filming the movie, it was a busy time as activities for the fourth album were going on at the same time. So the members couldn't give me a lot of advice but U-Know Yunho and Choikang Changmin supported me by telling me to work hard," and "I did not give U-Know Yunho advice when he began filming for his drama. I didn't worry about him because he's a friend who works as hard as he can in everything he does," and showed his deep trust and faith in U-Know Yunho.

He also showed his affection by saying, "U-Know Yunho is a friend who hardly ever says 'I'm tired', or 'I'm sick'."

At the press conference for MBC's drama 'Heading to the Ground', U-Know Yunho supported the three members who had a different stance than him by saying "I hope that the TVXQ dispute is ended in a good, reasonable way. There are a lot of bad rumors floating around but please don't believe them."

When more TVXQ-related questions were asked, he carefully said, "I don't know why everyone is thinking of it so negatively. There are a lot of bad rumors going around. I worry that these rumors are only worsening the situation. I hope that nobody believes in these rumors and from my point of view, I hope that everything ends in a good and reasonable manner."

On the other hand, SM Entertainment gave the ultimatum to the three members and said, "TVXQ will make a comeback next spring. Answer our question of your return by the 12th." An answer regarding this was not available from YoungWoong Jaejoong on the day of the press conference.