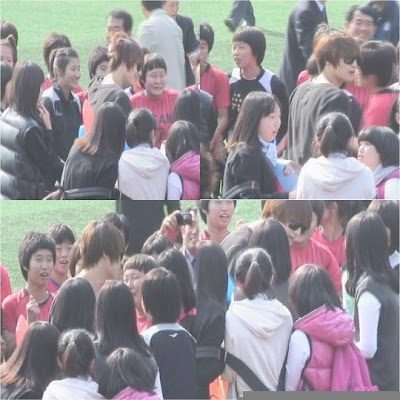 TVXQ member YoungWoong Jaejoong, who is caught in a legal dispute over the group’s exclusive contract with SM Entertainment, came into the spotlight when he appeared at the National Sports Festival High School Soccer Championship Finals.

One representative of Osan High School recounted the event on the school forum on the 28th and uploaded pictures of YoungWoong Jaejoong congratulating the team on their victory.

Although the soccer field became a mess when YoungWoong Jaejoong entered, he congratulated the fans and calmly left soon after.

YoungWoong Jaejoong is seen scratching his head and talking with the players while handing out autographs.

source: [edaily spn+DNBN]
translation credits: jeeelim5@tohosomnia.net
shared by: tohosomnia.net
Do not remove/add on any credits

He is smiling and so sweet of him to congratulate the winning team :) !