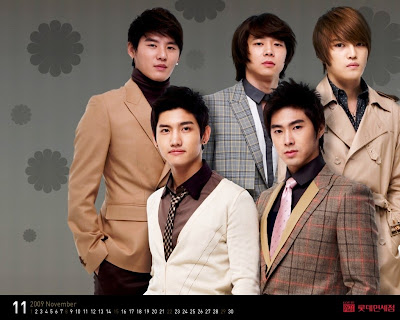 "It is a case of national fraud which has been concealed by words such as 'human rights' and 'slave contract'," SM Entertainment CEO Kim Young-min calmly read from a press release stating the agency's position regarding three members of TVXQ applying for provisional disposition of their contract with SM. But the remark, made during a press conference Monday morning, were beyond expectations. Kim went on to argue that the legal dispute came to light because of a cosmetics business which Micky, Hero and Xiah took on without discussion with SM. "They violated the contract first for their own gains and took legal action to cover it up," he said, adding that the court "will be protecting their individual egoism and ingratitude" if it rules in favor of the three singers.

But even more surprising was TVXQ members' U-Know and Max's position on the issue, revealed through a press release during the press conference. The statements, signed by the two, read: "We cannot believe that TVXQ may collapse because of a cosmetics business" and their fathers said the other three members were using the issue as "an excuse to cover up the fundamental reason (cosmetics business)". The statement by the two members are meaningful in that they could turn around the focus of entire case. Below are the main points at issue.

I. Background on legal dispute
Micky, Hero and Xiah applied for provisional disposition of their contract with SM in late-July, stating it was actually a 'slave contract' for the following reasons: ▲ TVXQ had signed a ten-year contract with SM which was renewed to a total 13 years ▲ TVXQ would not receive any profit from album sales unless over 500,000 copies were sold (altered after February 2009) ▲ If any member of TVXQ cancelled their contract with SM, that individual would have to compensate by paying twice the amount of the profit they would make in the future. The three declared the contract was not fair and wanted it corrected.

Meanwhile, SM argued during their press conference this week that the three members' business with cosmetics brand CreBeau was at the root of the dispute. SM said through a press release that the singers took legal action after starting to clash with the agency over their cosmetics business. According to SM, the three members requested a court to nullify their exclusive contract with the agency after the following incidents: ▲ The three signed a contract with CreBeau which would entitle them to five percent of the company's sales as royalty and held a promotional event as TVXQ without consent of their agency and ▲ The three declined to shoot a commercial for a major cosmetics brand because of their own business. SM's logic is that the three did not take legal action because of the contract they call unfair but to fulfill their bigger desires. CreBeau filed a lawsuit against SM for libel soon after, stating that "each members invested only a certain amount of money in the business, their intellectual property such as their names or photographs were never used, and they do not have a say in management of the business at all."

II. Legitimacy of their contract
Last week, the Seoul Central District Court made an interim court ruling, saying SM cannot sign contracts in opposition of the opinions of the individual's of TVXQ and will not interfere with their activities as a celebrity until a final verdict is made -- acknowledging there could be problems to the contract, based on legal standards. The three have also declared they have not received any of their share of profits since February this year.

But SM stated it had accepted most of the members requests to have their share in profits increased. According to SM, ▲ TVXQ voluntarily made the decision to sign a 13-year contract with SM who had guaranteed investment and support in their vision ▲ SM corrected the terms regarding compensation over cancellation of the contract in 2002, 2007 and 2008 upon recommendation by the Fair Trade Commission and ▲ SM agreed to greatly increase TVXQ's share of profits starting February 2009 and applied the term retroactively to the profits they made starting late 2008.

SM also stated that a wrong decision by the court could "bring the downfall of the industry's system which made 'hallyu' possible through long-term investment and raising stars". They went onto argue that, "If a contract, originally signed between two parties upon their consent and free will, is not valid after the success (of a singer or actor), this will bring confusion to the entire entertainment industry...... Many similar cases in the future will arise where they will try to come up with some sort of reason or excuse not to stick to their contract." SM emphasized on the special nature of the industry which invests large amounts of money to create a single idol group and that the contract was signed upon mutual consent.

III. Future of lawsuit
``The court's recent decision has temporarily granted the three members the rights to do their individual activities, but they can only work as TVXQ under the agency,'' SM said during the press conference. They also declared that they will ask the three for financial compensation for the losses and damage incurred upon the group and the agency with the ongoing legal action. And SM gave the three members a 10-day deadline, till November 12, to decide on whether they will be part of the team to resume their activities in Korea next spring.

But it is uncertain how much of an influence SM's argument will have on Micky, Hero and Xiah. Even if SM's remarks are true, the ongoing legal dispute is over provisional disposition of the contract itself and the court has already made an interim ruling based on whether their contract with SM is unfair.

IV. Will TVXQ continue to exist?
The biggest incident during the press conference was that U-Know, Max and their fathers revealed their stance on the issue -- showing their support for SM which widened their gap with the other three members. Till then, both parties had refrained from making emotional reactions toward each other because they both wanted their group TVXQ to last. But now, the dispute may turn into an expose. If the dispute up till now was about the contract between SM and the three members, there is a chance that they now might battle over whether the group will continue to exist. Of course, both sides have said they wish to remain in TVXQ but it seems impossible that they will be able to do without scarring each other. Will they be able to continue to exist? The case is now set at an important crossroad.

This is basically another piece of article with old news, not new news.Based on the reporter opinions and their twisting words to attract readers.

I would not believe that statement about CM and YH from SM ,their parents statements until it came from the mouths of the members.From the bottom of their heart.A piece of paper couldnt proof it.YH & CM is also under SM's mercy.AKTF ~ !!!!!Do believe only in DBSK.Not others.