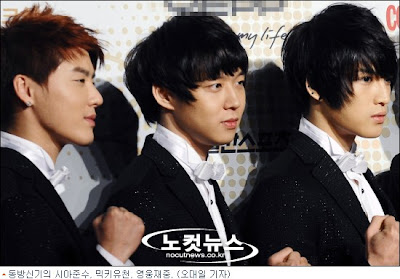 It seems we finally have word from the company that seems to be tangled in this mess.

When the TVXQ / DBSK / Tohoshinki controversy first began, the three members and their lawyers clearly stated that the three members’ investments in the CreBeau cosmetics line did not have any relevance to the court case. The core of the controversy was the legal issues of the slave contract. In SM Entertainment's opening statement, they stated that the lawsuit was because of the cosmetics issue.

To clear up the confusion, Kang Suk Won, the President of the Korean branch of CreBeau (Wishop Plus) was interviewed. Kang has already sued SME’s CEO Kim Young Min for slander to the Seoul Central Court on October 4th, 2009.

Kang said, “Although this case is obviously to fight the unfair profit splits and the conflict between the members and SME, SME is trying to push the blame onto CreBeau.”

Kang said, “In May 2009, some SME representatives visited the original branch of CreBeau Cosmetics in China twice. They determined that the members were not going against contract terms in any way, and now SME is distorting the true reason behind the case and putting out ridiculous claims... SME said that the whole lawsuit was due to the members’ wanting to continue a business that went against contract terms. This has no credibility in that SME has already approved of the investments previously. The members wouldn’t risk all the things that they gained as TVXQ by creating a conflict with their company over insignificant investments. It was a private investment, and the three have no ownership over the business in any way. They’re merely investors, nothing less, nothing more. What does this have to do with the lawsuit, and why is SME attempting to connect the two together?”

Kang went on to say that SME’s actions have brought about significant harm to the business not only in Korea, but all over Asia, including China, Japan, Hong Kong, Taiwan, Vietnam, and even the United States. For the employees and CEOs all over the world, CreBeau is their sole income. SME should have considered the impact its blames would bring to the business and the people involved in it.

“If SME’s company and its profits are so important that they are willing to harm others for it, then SME should recognize that it is the same for others.” Kang went on to say that “If SME does not stop distorting the truth and doesn’t apologize for the harms it brought upon CreBeau, I will not hesitate to reveal the details of SME’s absurd act to the public and to the court.”