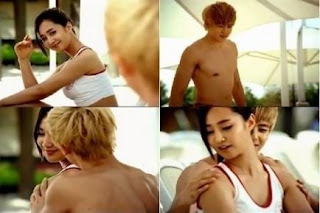 The couple scenes between So Nyeo Shi Dae Yuri and 2PM Nich Khun in the MV for ‘Cabi Song’ garner attention.

On 20th May, the full version of ‘Cabi Song’ featuring SNSD YuRi, YoonA and SeoHyun and 2PM Nich Khun, TaecYeon and ChanSung has been revealed. After which some of the scenes to the MV of the song were also revealed.

In the revealed video, there was a few scene between Nich Khun and Yuri which was said to be inappropriate for children – including the scene where Nich Khun applies lotion on Yuri and the 2 featured at a party scene.

Netizens’ comments are, “The 2 are so young, how can they have such scenes?”, “If they are just showing their healthy and bright features, why such scenes”, “It doesn’t seem like a Caribbean Bay CF anymore since it is so explicit” etc.

Also there are refuting comments from netizens like, “The 2 are both pretty and have good bodies, so what’s the problem”, “It seems they want to stand out from other CFs” etc.