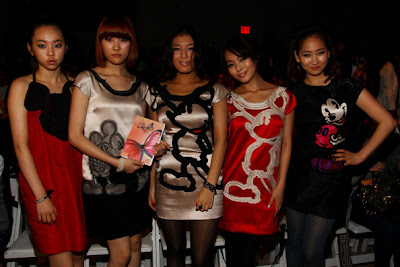 If you go onto Billboard's website right now, you will be able to see Wonder Girls' "Nobody" ranked at No. 76 on the Hot 100 chart which lists the top 100 singles in the United States, regardless of genre. It is one of Billboard's two most important and influential charts, alongside the Billboard 200 chart, which are also the most difficult to enter.

Last week, the Korean pop quintet became the first Asian artist in 30 years and the first Korean artist ever to place on the chart. It paid off performing in 42 cities over two months as the opening act for the U.S. leg of the Jonas Brothers' world tour, making efforts to bond with fans for hours before and after each performances and cram studying half a dozen hours of English everyday.


But the Wonder Girls have just started to work their magic and are aimed at setting higher records in the U.S. and Europe, their producer Park Jin-young, also founder and CEO of their agency JYP Entertainment, said during a press conference on Friday.

The Wonder Girls and Park appeared in front of Korean fans for the first time in seven months to speak about their journey and future plans.


Q: How does it feel to be back in Korea?
Wonder Girls: It feels good to be saying hello to you. And it moves my heart to be doing an interview like this.
Park Jin-young: It's good to see you all. I heard some people say to me that we are here to show off about making it onto the Billboard chart (laugh) but it was all coincidence. I'm very proud of the Wonder Girls and thank them. These young girls had a very tough time during the past seven months and they might not be the best singers or dancers in the world but I think they are the most hard-working artists.

Q: What is the true meaning of making it onto the Hot 100 chart?
Park: The Hot 100 is the chart we usually refer to when talking about the Billboard. The Billboard 200 survey is based on album sales so you can get on it if you have a strong fan base which will help you sell more albums. But 55 percent of the Hot 100 is based on airplay which reflects your popularity with the general public. That's why Asian artists have made it onto the Billboard 200 eight times since 1980 but never onto the Top 100 chart during the past 30 years. They studied English six hours a week and also met with their audience two hours before and after their shows.

Q: How were they able to get on the Top 100 chart?
Park: In the U.S., promoting is all about working yourself up from the very bottom. You won't get anywhere trying to make yourself known by appearing on TV first. You have to come in contact with fans on a personal level. That's why we set our goal as making one or two hundred fans in every city we performed in while on tour with the Jonas Brothers. In such a way, it usually takes about a year for a newly-debuted artist to make it onto the Billboard chart, but we did it in just four months. And it was only possible because we did eight months worth of work in four months. For example, it usually took about 10 hours to travel to each city but as soon as we get there, we would go straight to the concert venue rather than our rooms. There, the girls would meet with fans who were waiting to meet with the Jonas Brothers and say hello to them. They also met with fans after the concerts and took photographs with them. That's how we tried to gain more fans in the shortest time possible. We also used the Internet by using websites such as Twitter and those fans started requesting for our song to be played on the radio. The step after that is to appear on TV.


Q: You must have had a hard time in the U.S. What things do you remember?
Park: We were on a bus instead of a plane during the tour. Since the bus always shook went we slept, it was my wish to be able to sleep on a bed that doesn't shake. The girls performed about five times a week so about twice a week, it felt great sleeping on a bed that doesn't shake.
Mimi: When I first when to the U.S., every single night... (cries for a moment) I cried every night. It may be because I am young but I was so lonely. And of course, I wasn't alone -- I had my members, producer Park and the staff -- but it took a while to adapt. It was hard having to meet strangers when my English wasn't so good.
Yenny: Nobody knew us when we first went on tour with the Jonas Brothers. So we used to shout out to them, asking for them to sing and dance with us. Then, when we performed at Jonas Brothers' concert a month after the tour, people were happy to see us and sang along to our song. I was so happy. And it definitely was hard having to speak in English. It isn't perfect yet but I will try my best to learn it in the shortest time possible so it doesn't affect our career in the U.S.

Q: Who was the most popular member in the U.S.?
Sun: I think it's because of her skin color which made her look sexy (laugh) but Yubin seemed to be the most popular.
Yubin: But they don't actually recognize us that well. I sometimes get called Sun instead. (laugh) I think they like us as a group right now rather than liking a certain member in particular.

Q: What is the difference between American and Korean fans?
Yenny: Korean fans are shy but we can tell that they like us more. When shaking hands, they'll sometimes barely touch our hands and then just run away. But American fans don't know us that well yet. (laugh) They're more friendly -- treating us like friends they've met in the neighborhood -- and tell us that we sing well or ask us where we bought our clothes.

Q: What did you want to do when you come to Korea?
Yenny: Eat crab preserved in soy sauce. And I ate it this morning. (laugh) I arrived in Korea early yesterday morning and my mom had gone to church so I hid in our veranda to surprise her. But she already knew I was coming so she had prepared a party for me. I was so happy and we cried a lot.
Sun: I missed eating my grandmother's food.
Mimi: I wanted to come to Kore and eat at a kimchi jji-gae (kimchi stew) restaurant. (laugh)
Yubin: My parents live in the U.S. but my mom also came to Korea. I was so happy because it was a surprise.
Sohee: The first thing I did was cook my dad bean paste soup. (laugh)
Yenny: When we were in Korea before, we sometimes sang "Nobody" up to ten times a day. But in the U.S., we could only sing it once a day on stage. That one performance would sway the rest of our day. So we came to realize how important the stage was for us. We never received so many camera flashes in the U.S. but I felt that we really are back in Korea at the start (of the press conference) with all the flashes. I really missed Korea a lot.

Q: Do you have any plans regarding their activities in Korea?
Park: We're not in a situation where we can work in Korea right now. Partners in the U.S. have started believing in the future of the Wonder Girls. I think the U.S. and Europe are where we should be headed. Many people doubt that it'll happen but I want to prove them wrong. And even if we fail, I want to do so after having done our best. I think we've been doing okay so far. (laugh) The Wonder Girls will probably come to Korea when while on worldwide promotion. Of course, they'll stay in Korea longer than elsewhere. The Wonder Girls were only able to get where they are today because of their Korean fans.

Q: What is the reason their album sales increased? They also topped the 'Top singles sales' chart.
Park: American elementary school students these days don't discriminate. So the Wonder Girls persistently targeted their promotion at those students. One of the strategies we thought up for that was selling their single albums at stores of teenage clothing brand 'Justice'. I thought all we needed was to get our albums into 'Justice' since there are about a thousand of their stores in the U.S. So I went and talked to them, and when I showed a video of the Wonder Girls to the CEO, he said he wanted to see them for himself. He went to see their performance and, the girls always seems they do their best when it really matters. (laugh) They performed so well that the CEO liked them and their CDs were placed in their stores. They are sold at a dollar -- the same price as it is sold on iTunes.

Q: What do you think is the reason that Wonder Girls are making it in the U.S.?
Park: The U.S. music industry is making less profits simply from its music. So now they're investing not in the music but in the people. It's called a 3'60 degree contract' which means the singer will share all the profits he or she makes during the period of contract. That's how important an individual's appeal is and the U.S. music industry liked the Wonder Girls a lot for who they are.

Q: Were there any difficulties you faced because you are Asians?
Yenny: A lot of people helped us and took care of us while we were on tour. I was sad at times because some people thought we wouldn't be able to speak English at all because we were from Korea.
Park: They would have never made it if they had come here five years ago. But I think there's been a large change in perception during the past five years. President Obama's election has also played a big role in easing the wall between different races.


Q: What will your concept be for your U.S. album?
Park: Retro. It's been in Korea for a while but "Nobody" was the first time such an attempt was made in the U.S. and nobody does it yet. Our next concept will be similar too.

Q: Girl groups are the trend these days in Korea. What are your thoughts on this?
Mimi: They're all very interesting and really good. I sometimes wish I could be on the same stage as them too.
Park: Personally, 2NE1 has the most similar music taste to mine.

Q: Tell us about the rest of your schedule while you're in Korea. And a word to your fans here?
Yenny: We arrived in Korea early yesterday morning. We will perform in China next week, wrap up our schedule here and go back to the U.S. in early November.
Yubin: I am so happy to get to meet my fans in Korea. I will try to keep the good news coming from the U.S. Thank you so much.
Sun: Everyday was a brand new day for us because we were pretty much starting all over in the U.S. I think our fans' support is what kept us going and helped us get where he are right now. Thank you very much.