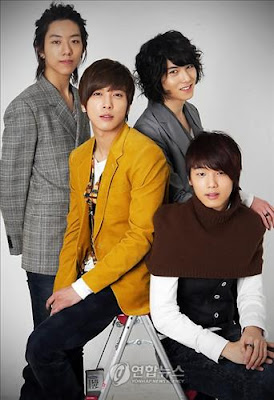 Through their single , rock band CNBLUE pulled an allkill* on all the music charts and now the
"BLUESTORM" has continued into the CF* world.
After debuting for only 2 weeks, CNBLUE gained the new nickname of the "BLUECHIP" in the CF world as they signed as models for 3 different companies.

CNBLUE's company FNCMUSIC revealed, "We signed as models for casual clothing brands "NII" and "THE STAR HOUSE" and most recently, we signed a contract with the "PurpleBird" clothing brand."

CNBLUE debuted as CF models for clothing brand "NII" whose previous models included Super Junior and Big Bang and is a company known for showcasing "rising stars". "The Star House"'s former model was Jang Geun Suk and now CNBLUE is their new image.

CNBLUE's fresh image along with their appeal to the masses gave them a high value causing many lovecalls* from CF companies.

FNC MUSIC commented, "We have even more requests from CF companies at the moment. We believe we will be able to give a new announcement in a short while".
CNBLUE was acknowledged as the music world's "BLUECHIP" while they dominated both major and online music charts, proving their weight in their name.

Before debuting, Jung Yong Hwa's drama "You're Beautiful" garnered attention and CNBLUE won No. 1 on KBS MUSIC BANK on the 29th and the SBS Mutizen Award on the 31st, realizing the "BLUESTORM" effect and proving themselves as "Powerful Newcomers". Even last week when they held their first signing event, thousands of fans came to see the stars.
Cr: CNBLUELOVE
posted by: shaynekay@dkpopnews
Tags: Cnblue
Share
Previous articleNext article