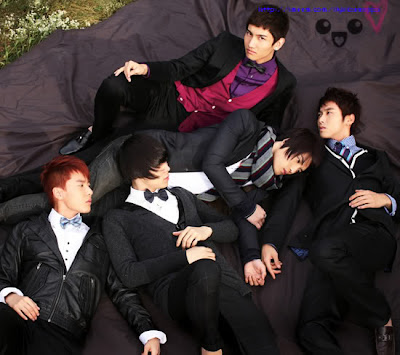 After everything that has happened tonight, many are waiting for the official words from SM Entertainment, and allkpop is first to bring you the statements from a press conference that just took place!

The entertainment company held a press conference today and told their side of the story regarding their legal dispute with three members of TVXQ/DBSK. In addition to a statement by Yunho and Changmin, the two members who did not take legal actions against SME, and statements by their fathers, SME's own representatives spoke up as well; Mr. Kim Young Min, the CEO of the company, stated the following.

When we first planned for DBSK, we wanted to make them the number one artist in Asia. Five members and their parents shared such vision and agreed to add 3 years to initial 10 year contract. The members and their parents agreed to the contract because they found the vision as the number one artist in Asia, constant support from SM, plans to go abroad and continuous investment into the group very appealing. Everyone thoroughly reviewed the contract and agreed to all clauses. To keep the promise of advancement into Japan, SME invested over $4 mil into DBSK despite poor financial condition that the company was in. After 5 years in Japan, we can finally say that we are successful. It is unfair to focus merely on the number 13 without any background knowledge of how the contract was made and the goals and visions shared between SME and DBSK.

On January 6th of 2009, the three members told SM that they were going to China for a vacation; but in fact, they attended a meeting with the beauty product company's Chinese subsidiary to talk about investment into the company. We only realized of the deal after photos of them promoting the company surfaced online. We then learned that the three members are board members of the Chinese subsidiary and that they even carry business cards of the company with their name and position engraved.

The three members demanded increase in their share in profit and we accepted their demands. In April, we had a dinner party after our concert in China. The three members told members of other groups about how much they trusted in SM. Shortly after in May, a Japanese fan asked AVEX's customer service department regarding an event by the beauty product company which claimed that the winner would have dinner with DBSK. SME feared that losses resulting from matters related to the beauty product business would be impossible to recover from. We wanted to review the members' contracts with the beauty product company to protect the members from potential dangers but they refused to share the contract with SME and did not take any actions to relieve SME from our concerns regarding their investment into that company. In June, a major beauty product company contacted us and said that they wanted to use DBSK in their commercials but the three members refused due to their own interest in beauty product business. Shortly after they took legal actions against SME.

The truth face of their action is a fraud. A fraud which fooled the entire nation with words such as "human rights" and "slavery".

Regarding the recent court ruling; three members are now free to pursue personal projects, however all DBSK-related work must be done through SME. Yunho and Changmin intend to promote DBSK in Korea next spring, and we feel that it should be planned at least six months in advance. SME asks the three members to respond to this by November 12th.