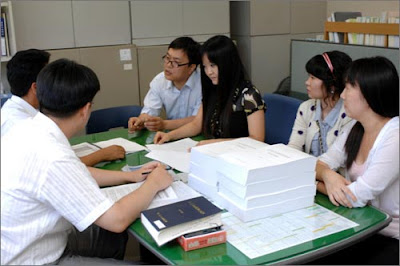 On the 27th, the Seoul District Courts’ partially acceptance of the exclusive contract suspension request submitted by three members of TVXQ, YoungWoong Jaejoong, Micky Yoochun and Xiah Junsu, could be seen as a ‘victory’ of the fans.

At the end of July, when YoungWoong Jaejoong, Micky Yoochun and Xiah Junsu filed the dispute to the Seoul District Courts, Cassiopeia rose up as strong ’supporters’ by criticizing and highlighting every single unlawful clause in the exclusive contract that gave the agency the upper hand.

The support given by the fans of TVXQ are somewhat different from the actions of those of previous idol groups. First, instead of engaging in emotional, group activities against the agency, they are acting in a efficient, sensible way by informing society of the unlawfulness of the contract.

On August 14th, at the Korean Cultural University’s debate ‘Problems and Solutions to the entertainment management system through the TVXQ situation’, Kim Euna stated, “If you look at the schedule of TVXQ that the fans put together, the amount of work that TVXQ has been put through ever since they debuted is an incomprehensible amount,” and “Please don’t see this dispute as a mere fight for money, but a fight to protect human rights.”

Fans also walked to the streets. The petition that began online and offline on August 26th gathered signatures from 188,000 people who were against the unlawful contract system that was rampant in the nation.

Fans submitted a petition to the Seoul District Courts who was in charge of the case to act as witnesses for the unlawful act put upon minors by the agency under the name ‘People who are against SM’s unlawful contract.’ In this petition, they stated, “Please put an end to contracts that chain celebrities and puts them at a unfavorable, unequal position.”

Their voices have risen towards national organizations as well.

They submitted another petition to the National Human Rights Commission saying, “In the case of celebrity exclusive contracts, they are not contracts for the trade or sale of objects, but for human talents and work which means that the basic human rights must be protected before anything else. Therefore, the National Human Rights Commission must lend a helping hand in this issue of the unlawful contract so that it does not violate the human rights of the members.”

They also filed for a Compensation request against SM to the Korea Consumer Agency when the agency indefinitely postponed the ‘SM TOWN LIVE 09′ concert in August. The fans stated, “This is not a problem between fans and an agency, but a problem between consumers and sellers,” and said, “We are not merely asking for compensation because we want our money back, we are filing this because we cannot sit back and let a company tyrannically attempt to take control over us and we wish to get back our rights as consumers.”

Recently, the fans criticized the Korean Youth Committee’s action of giving CEO Kim Young Min an ‘Order of Merit for Teenagers’ for “Supporting the growth of the teenager culture” by saying, “By giving Kim Young Min this order of merit during the waiting period for the verdict, the Korean Youth Committee is giving up its neutral position in the trial and taking sides on the issue.”

The movement of fans did not stop at the Korean border. Fans from 40 countries around the world collaborated on YouTube by writing messages of support to TVXQ; all connected by the love for the group. Japanese fan club ‘Bigeast’ showed their unwavering love for TVXQ by collecting 1000 messages of support.

As the fans’ voices rise, politics began to move as well. The TVXQ dispute has become a ‘hot potato’ at the National Assembly.

At the National Assembly’s inspection of the Department of Culture, Sports and Tourism, many officials said, “Many entertainment agencies are putting unlawful pressure and orders against their celebrities and have gotten to the point where they violate human rights,” and put forth TVXQ’s ’slave contract’ as the main example.

At the National Assembly’s inspection of the Fair Trade Committee, official An Young Ho talked of the problem of Exclusive Contract Lengths which came up due to TVXQ’s exclusive contract suspension request and stated, “We are seriously investigating the problem of TVXQ’s unlawful contract as a complaint has been made,” and “There is a problem with the length of 13 years.”

Whenever fans got involved, they stated, “If we leave things as they are, the ‘bad root’ of the entertainment business will continue to grow,” and “We must correct this activity as soon as possible to ensure that another TVXQ does not come about.”

Through their legal representative, they stated, “We would like to sincerely thank the fans for their unwavering trust and support,” and “We will repay the Courts’ decision to free us from the unlawful exclusive contract and allow us to pursue individual activities by striving to become unique true artistes.”

TVXQ fans are still holding a boycott against SM Entertainment. They are still striving to receive their compensation from the Korea Consumer Agency. Although the Courts have made their decision, it seems as though the fans will not stop their actions against the agency. In fact, these actions may not cease until the lawsuits of the exclusive contract and income division end. They don’t seem to be slowing down anytime soon.