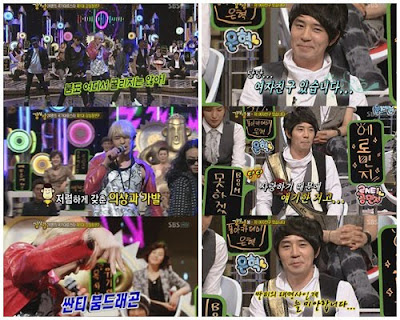 Boom may have joined the army for his mandatory military service, but his legacy will live on as Kang Shim Jang's famous Boom Academy will continue.

Boom Academy is a sort of an entertainment school within Kang Shim Jang which Boom had set up along with Leeteuk and Eunhyuk from Super Junior. Those three would put on a comical show together every week during the show.

The academy could have been closed down due to Boom's departure, but the producer of Kang Shim Jang revealed that Leeteuk and Eunhyuk will continue the academy through putting on comical shows each week. A new member will be picked through an audition he said, and the rivarly between Boom Academy and Bracademy consisting of Fly to the Sky's Brian and 2AM's Jokwon will continue as well.

The producer added, "Boom even had a meeting with Leeteuk and Eunhyuk before departing, giving them ideas of how to continue on. Leeteuk was given the responsibility of keeping the academy open." Kang Shim Jang still has two weeks worth of recorded material left over, which means that we will get to see Boom Academy with founder, Boom still in it for another fortnight.