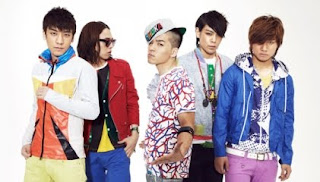 Returning to Korea in mid-2008, Big Bang released their third mini-album Stand Up, which featured collaborations with the group Daishi Dance and the Korean rock band No Brain. Lead single “Day By Day” was a major hit across borders. At the same time, their Japanese song “Number 1″ from their album of the same name was released and peaked at No.3 on the Oricon daily album chart.
Big Bang’s following album Remember was also a major success in Korea and by the end of 2008, the band had become one of the top-selling bands in the country.

In early 2009, the group collaborated with YG Entertainment’s newest girl group 2NE1, also known as the female Big Bang, for the song “Lollipop”. The single became a worldwide favourite although it was originally produced for a mobile phone commercial. With the success of “Lollipop”, the group released a new Japanese single “My Heaven” in May 2009.

Following their successful Japanese debut under Universal Music, and their hit single “Gara Gara GO!”, all the members of the group are releasing their own full solo albums, with G-Dragon’s Heartbreaker as the first. Having composed and written a majority of the songs on Stand Up (except “A Good Man”, which was composed by fellow member T.O.P.) and other previous albums, band leader G-Dragon is known as a major producer and songwriter for the band.

If you support Big Bang, don’t forget to vote for them in [V]’s all-new, ultra fantastic Battle of the Pop now!
Tune in to catch music from Big Bang on Videoscope Saturday, 31 October at 8pm HK/SG, 9pm MAL.