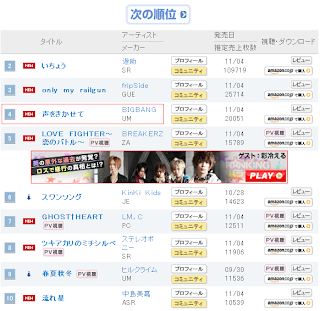 Big Bang's 4th Single '声をきかせて' (Let Me Hear Your Voice) has ranked 4th on Oricon's weekly singles chart!
According to Oricon, it ranked 3rd on the Daily chart on November 2nd, the day it was released, and now its on the weekly chart as well.

Big Bang is the first non-Japanese artist who has had 4 albums in the TOP 5 Oricon Daily ranking so soon after their major debut.

Big Bang's future in the Japanese music industry is being highly anticipated, especially since it's only been 5 months since their major debut.