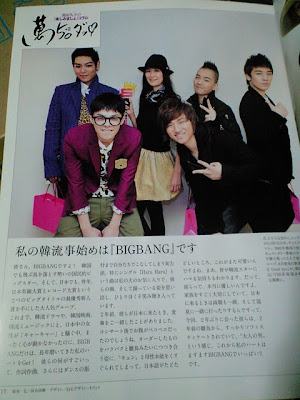 Everyone, it's Big Bang! In Korea they are nationally big stars with tremendous energy. But they are also a greatly popular group even in Japan, having obtained two "big titled" awards, record and cable television, as the best newcomers of the year.

So far, while Japanese women talk excitedly and make a fuss over K-dramas, Korean movies, and K-pop, my heart had not been completely moved. Only Big Bang has stolen my heart which had been polished for a long time. Anything of theirs is great: lyrics, music, and even up until the choreography, they have the ability to do it themselves. Particularly, it was the music of their single Haru Haru that I deeply like. And when I remember their faces and how they look when they're dancing, I start to chuckle by myself.

Two years before, when Big Bang came to Japan, I was able to dine with them. After the concert, they were starving. They munched down on what they ordered, and while they suited their turtledove-like appearance with their digging, "Kyun!" my maternal instinct was unfortunately tickled. When they spoke in broken Japanese, this was once again cute, don't you think? Well, everyone's feeling towards Korean Wave stars changes too. Afterall, they were really kind. They gave great importance to their family and they went together with their parents to Japan. Also, I heard they went to the onsen (Japanese hot spring) together. This time, after an interval of two years since I met them, from the turtledoves of two years ago, they were completely sophisticated and they gave off the feeling of grown up men. From now on my heart is more than ever filled with Big Bang!