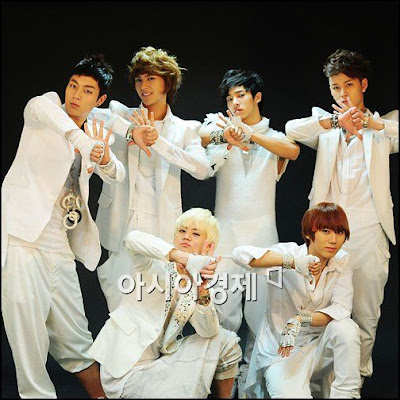 People say fall is a man’s season. A southern wind is blowing in the music industry. Cute girl groups controlled the stage, but now boy idol groups full of charisma are making the hearts of older girls skip a beat.

It has been less than a month since their debut, but the hot 6-member male group BEAST is speeding up the strong wind. With their remarkable live skills, powerful dance and each member’s individual looks, BEAST’s popularity is already spreading by the word of mouth of their fans.

◆ “We have so many stories; if we made a ‘Human Theater*,’ there would be more than 10 episodes.”

Although it seems like BEAST has had it easy since their debut, the truth is that they have a lot of past experiences. Some have failed on the verge of debut, while others debuted but tasted bitterness. “If you make our story into ‘Human Theater*,’ more than 10 episodes would easily emerge,” said the members casually, but their words have weight behind them.

BEAST member Yoon Dujun failed to remain until the end on Mnet’s reality program ‘Hot Blood.’ The other members from that time are currently performing as 2PM and 2AM.

Jang Hyung Seung suffered when he was eliminated in a survival program even as his debut with Big Bang was right in front of him, and Lee Kikwang debuted under the name AJ as a solo artist but was unable to find huge success. Yang Yoseub, Yong Junhyung, and Song Dongwoon spent around 4-5 years as trainees in JYP.

They could have stood on stage as Big Bang and 2PM, but they don’t have any regrets about an “if only…” situation. On the contrary, their painful pasts have become the strength that allows BEAST to come together even stronger.

“My experience appearing on ‘Hot Blood’ benefitted me; it didn’t hurt me in any way. At that time, I was extremely unhappy and hurt, but little by little I matured. I looked ahead and fixed myself. It [my elimination] became an opportunity for me to practice harder and become more earnest.” (Yoon Dujun)

“I would be lying if I said that I didn’t have a hard time after I was eliminated from Big Bang. But I continued to stay in touch with the Big Bang members. A while back, I met G-Dragon and Youngbae (Taeyang) hyung on Inkigayo, and they gave me a lot of advice. They worried about me, asking if I fight with the other members of BEAST and telling to me get along well with them. I’m thankful.” (Jang Hyun Seung)

The BEAST members say with a laugh, “Maybe it’s because we all have at least one painful experience, but we consider each other a bit pathetic. They say misery loves company.”

“Since we’ve known each other since before debut, we understand each other better as well. We’re supporting each other as members and working hard,” they added, displaying their special friendship.

◆ “What makes BEAST different? Our passion* for music.”

With their long period of waiting and desire to debut, they have finally stood on stage. They put away their nervousness and the fear of “will do well?” and perfectly enjoyed their performance. This was the moment to let their long practice and stage experience shine through.

“We always thought we would be satisfied and happy after debut and our debut day would become the best day of our lives, but in reality, after we came down from the stage, we still felt like we were missing something. The youngest, Dongwoon even cried really hard…with every day that passes, performing on stage gradually becomes more and more fun. Everything is fascinating and fun, and we feel like we’ve gained enough confidence to enjoy performing.”

Around the time of BEAST’s debut, boy idol groups started returning to the music industry, and the competition began. They have an especially interesting competition with their fated rivals who debuted on the same day, MBLAQ.

BEAST said, “MBLAQ is extremely cool. The members are close and don’t seem like strangers; they’re supporting one another. We feel like the two groups are having a synergistic effect, so even we are thankful for MBLAQ’s debut.”

But the subtle competition cannot be completely ignored. When asked what set them apart from other idol groups, BEAST replied that if nothing else, their passion* for music will never be overshadowed.

Rapper Yong Junhyung in particular showed passion while making raps for this album. In addition to composing and writing lyrics, he also participated in arranging 4minute’s ‘Muzik’ and is rising to prominence.

“The composer hyungs gave me the chance to try. I feel like if I had taken someone else’s rap, it could only come out awkwardly. Thinking that this is finally the time, I showed them lyrics I had written a long time ago. Although I’m still inexperienced, I’m learning enthusiastically. In the future, I hope to include a song I’ve written myself in an album.”

BEAST said, “If the opportunity arises, we would like to make our choreography, rap, songs, the entire album ourselves.”

New group BEAST hasn’t even shown us half of what they have in store. Their take-off starts now.