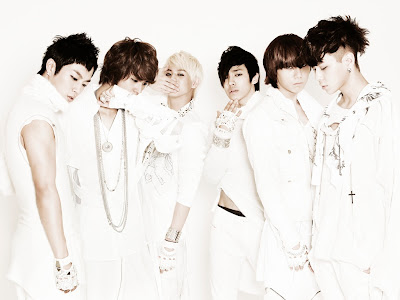 BEAST started living together about 3-4 months ago. In their latest interview with Newsen, they remarked, “We finally know what newlyweds are talking about when they say ‘Even the way we squeeze toothpaste is different.’”

“Living together is really fun. Lately we don’t have that much time to be at our apartment, but depending on the neatness of each member, we suffer or don’t suffer.”

In BEAST’s apartment, there is a “District 13”* – the clothing room. Trying to organize the clothes of 6 boys is useless. The members “just quietly close the door because we can’t look at it.”

The BEAST member who takes care of neatness, Yong JunHyung said, “At first, I planned on just keeping my area clean, but my cleanliness spread. I threw away the members’ stuff that was lying around and did other harsh things, but they didn’t even blink an eye. Instead, they started disobeying even more.”

“Truthfully, there isn’t anyone who is messy. If I ask, “Who did it?” they all deny it. At first I was I was hurt, but now I accept it.”

Today’s singers do not just sing. They take control of variety shows and boast speaking skills that rival the skills of gagmen. Does BEAST have interest in entertainment? The members picked golden hair Yang Yoseub and leader Yoon Dujun as the members who are full of entertainment skill.

“I had a lot of interest in entertainment. But it seems like it could be difficult. Timing is important. I don’t even know if I have entertainment skill. I’m the type who is funny while I ruin my image, so I’ll have to study hard. My shoulders are heavy. (laughs)” (Yo Seub)

The members say, “Yoseub is really funny, but unfortunately, instead of impersonating celebrities, he only impersonates people like our company chief, manager, and company workers. Even if he wanted to, he can’t show his skill on broadcasts.”

BEAST (Yong JunHyung Son Dongwoon Jang Hyunseung Yang Yoseub Lee Kikwang Yoon DuJun) made an electric debut with their title song, “Bad Girl.” They are only rookies, but instead of extremely nervous expressions, they perform with confidence and have already garnered fans from Japan, Taiwan, China, and other nations.

With performances this coming October 24 on MBC “Music Core” and October 25 on SBS “Inkigayo,” Beast will continue their pursuit of popularity.