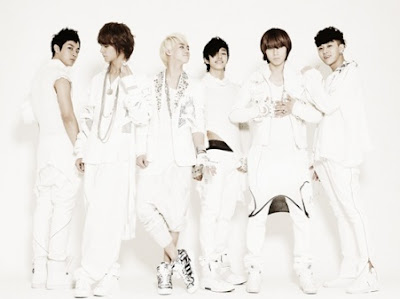 And I don't mean that derogatorily - trainee life can be long and exhausting for any idol-to-be, but having to go through the process twice can make the experience even more bittersweet. BEAST was making a buzz far before its debut due to the head-turning track record of some of the members - with guys that were considered for popular groups today like Big Bang and 2PM, who wouldn't be curious?

For those of you that don't know, leader Doo Joon starred on MNet's Hot Blood documentary, which followed the trainee days before OneDay broke onto the music scene. "I became a JYP trainee in 2007; after only three months, I starred [on the Hot Blood documentary]. Reflecting on the past, I now realize that I was arrogant to the point that I now wonder, "Why did I act like that?" Back then, I didn't have the sincere desire to succeed as a singer. I'm embarrassed of that."

Doo Joon isn't the only one that had a shot at a high-profile group - member Hyun Seung also starred on MTV's Big Bang pre-debut show, but was cut during the series. However, despite experiencing the bitter taste of failure, Hyun Seung eventually got another chance to debut with his opportunity with BEAST.

"In my third year of high school in 2004 (9th grade in US school system), I participated in YG's open casting auditions. I passed the first and second rounds and even called my parents to watch the third round because I thought I'd make it, but I was eliminated to my surprise. I was frustrated and directly went to President Yang Hyun Suk out of impulse. Looking back, I acted a bit too boldly," he reflected belatedly, which brought laughter. "He saw how earnest I was and finally accepted me as a trainee."

Hyun Seung trained for a year and four months before being considered for Big Bang and starring in the group's MTV documentary. After he was cut from the group, Hyun Seung experienced sadness and jealousy from watching Daesung, TOP and Seungri be chosen after six months as trainees. However, those days are in the past and Hyun Seung has matured.

"I think I'm better off now. It's like the irony of destiny, and have practiced and worked harder in result. Being part of YGE and Big Bang gave me good memories, and if it were not for that program, I probably wouldn't be here. Before our Inkigayo performance, I saw Jiyoung hyung (G-Dragon of Big Bang) for the first time in three years. Jiyoung greeted me and treated me so warmly that I was nearly brought to tears. Back in my trainee days, he was my closest hyung."

Furthermore, Yoseub was a previous JYPE trainee as well. However, after receiving poor results in an evaluation exercise, he decided to leave the entertainment. "After leaving, I performed weekly at an Apgujeong club. ALl of these stage experiences became my blood and skin. I'm in debt to AJ, who was my former classmate; because of him, I was able to join BEAST. In turn, I also brought another member, Hyun Seung into BEAST; we met as dancers for a show performance team, and I knew he was good."

And of course, who can forget Ki Kwang, the one member that actually debuted? Well-known as AJ, his stage name back when he was a solo artist earlier this year, Ki Kwang already kicked off his singing & acting careers with Dancing Shoes and High Kick Through the Roof, an MBC drama. However, despite his success, something was missing. "When I debuted as AJ, I was lonely. It was burdensome to be the only one on stage, and being alone for interviews was tough. With my fellow members of BEAST, I feel much better and happy. To tell the truth, the members of BEAST helped out behind stage even when I was solo artist AJ. In those times, the guys were a big source of strength; every day, I thought about how I wanted to sing together with them."

The interview also the talents of the rest of the members; although this group is still new, it's clear that they've set high goals and are determined to make a lasting mark on the kpop scene. "We'd like to receive the rookie award, and be as symbolic as a group like g.o.d. We'll work hard."

Aww, talk about pulling at the heartstrings! At least the ends justify the means - without their past efforts, who knows if Doo Joon, Hyun Seung, Yoseub and Ki Kwang would be part of BEAST today had they not undergone such experiences. Furthermore, they have 100% support from their respective ex-bandmates - with heartwarming messages from powerful idols like Big Bang's G dragon and 2PM's junho and Taecyeon, BEAST doesn't need to look at these other boy bands as competition but supportive brothers.