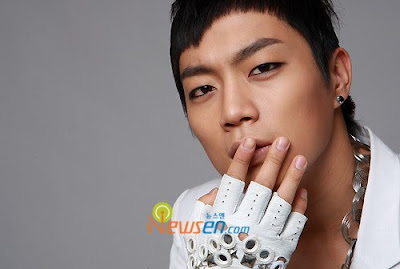 [NEWSEN]
Beast's YoonDooJoon and Jang HyunSeung seems to have a special story.

In Recent interview, Beast's Leader YoonDooJoon said "Actually, I used to be in a Junior High School Soccer Team. I also dreamed about being a High School Physical Education Teacher" and "During my junior - senior high school years I have lost a lot of weight. It was around the first or second year of high school that i've gone through a diet."

Then how did the the dream of being a physical education teacher or sportman change to being a singer? "At the time, MTV was broadcasting the 'BIGBANG Documentary'. I watched that and I realize that I would love to dance and sing with my friends. They just seemed so cool."

That time, Beast member JangHyunSeung appeared on the documentary. BigBang was preparing for their debut, but unfortunately HyunSeung was eliminated. DooJoon said that it was the first time he's seen HyunSeung, on TV.

"I was on my 2nd year of high school (TN: year 11) when 'BigBang documentary aired, and it changed my dream. My parents and teachers didn't agree with me. However, I pleaded to register for Music school. After that, I started auditioning to become a singer."

As many have known, YoonDooJoon was on 2PM-2Am documentary "HotBlood",a reality program that shows the preparation for their debut. YoonDooJoon said "During the hard training days in "Hotblood", together with ImSeulOng (2AM), Our hobby of enjoying midnight snack has been changed overnight."

"The time, I think it was so long, but then again, it was so short. This is Beast's first step in the music industry and we are walking to the top. We will show you our best on stage and please expect our new look in the future."

Meanwhile Beast (Yoon DooJoon, Jang HyunSeung, Yong JunHyung, Yang YoSeob, Lee KiKwang, Son DongWoon), made their debut with the title track "BAD GIRL".
Instead of looking like a nervous rookie, They have a laid back expression and performance since they have performed in Japan, Taiwan, China and other places which gather a lot of fans.