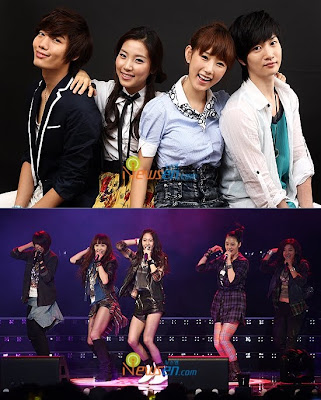 After coming out about being each other’s fans, 4 member mixed gender group B2Y and girl group f(x) have become intimate.

Immediately after the broadcast of SBS Inkigayo on the 18th, in the waiting room B2Y and 5 member multinational girl group f(x) learned each other’s song and dance and exchanged their friendship. Particularly, f(x) were the first ones to reveal that they were fans of B2Y, so from beginning to end the atmosphere in the waiting room was friendly.

After B2Y finished performing their debut title song ‘Jeez’, and while they were coming off the stage, f(x)’s Luna revealed to them “I really like the song” while singing and dancing along to it. While they were showing an example of their dance, B2Y’s female members Nara and Rika, were supported by the remaining members from the two groups.

Also B2Y’s members followed along to f(x)’s LA chA TA, contributing to the warm atmosphere. After coming out of their waiting room, B2Y and f(x) contrasted the ‘rival’ name that they were given between the two groups, and attracted the attention of people.

Among the flood of girl groups, f(x) who has been shooting forward as super rookies, performed their song LA chA TA at Inkigayo.