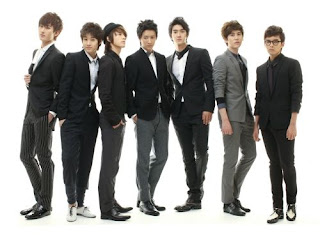 6th of nov, Stefanie Sun’s “The answer is….2009 world tour” guests would be Korea’s popular group SJ’s sub-unit SJ-M(Super Junior-M). Yesterday the reporter understands that, SJ-M is seeing their guests performance as important as their own concert, they will fly in on the 5th and arriving at Chengdu and have their rehearsal a day earlier to show their support for Stefanie Sun. Yesterday, the organizers have showed the media the confirmation for SJ-M being a guest at the concert. Siwon, Donghae, Kyuhyun, Ryeowook, Henry, Zhou Mi, these few handsome lads have signed their names on the confirmation papers and related persons have revealed, to expand further into the Chinese market, the Korean members’ Chinese-speaking skills have improved very fast, this time round in Chengdu, they are looking forward to the whole audience teaching them to speak in Sze Chuan dialect.
SJ-M debuted with an additional two Chinese members, Henry and Zhou Mi, in addition to long weeks in China for promotional activites, the Korean members’ Chinese have improved quickly. Leader Han Geng, when there’s an opportunity will teach the members his hometown’s dialect- Dongbei dialect. And SJ-M members in had a lot of promotions in the towns of Dajiang(north and south), they learn as they go along, speaking the dialect in the place they are in. Donghae, Kyuhyun in a recent media interview, even used Chinese to “cross-talk”, Kyuhyun expressed, “I need a girlfriend”. Donghae said too, “I want to find a girlfriend in China…and can speak good Chinese.” Causing the whole audience to laugh non-stop. This time coming to Chengdu, the members will of course ask the fans present at the concert to teach them, sze chuan dialect.