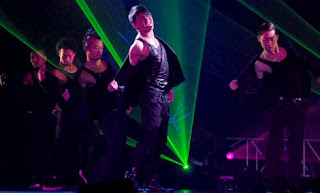 Popular group TVXQ member, XIAH Junsu (Kim Junsu) on May 22th had his solo debut stage under a fashion and music festival event held in Japan’s largest park Yoyogi First Gymnasium, the “Girls Award 2010″, performing his first solo live. The live was opened by Kuroki Meyisa, who announced three lives among several highlights of the event such as the comeback stage of Erika (Sawajiri), and the first high roar among audiences was heard later on. Even when there were only a vision of pre-images, screams like “Kyaaa~!!” and “Junsu!!!” were heard, enthusiasm suddenly heated into the circle of 12,000 audiences.

While some of the fans’ excitement was close to hysterical, after Junsu finished one number, he greeted the audiences, “Good evening! I’m Xiah Junsu. Today I’m really happy I could participate in “Girls Award 2010″. he said, “Do everyone feel excited?” and it definitely added even more fuel to the fans, it was a climax that made so many staffs had to move hurriedly to secure the stage, “Please do not take pictures!” such scene was noted.

XIAH Junsu performed two songs at the event, ‘Intoxication’ from his upcoming single release on the 26th “XIAH” which will also becomes the insert song of a drama starring another TVXQ member Yuchun “Beautiful Love ~Kimi ga ireba~” (starts to broadcast at BeeTV on June 4th), and ‘XIAHTIC’, Junsu’s solo song that was priorly recorded in TVXQ 29th single “BREAK OUT!”. XIAH Junsu’s singing and dancing moves highly boiled the venue, Junsu waved to his fans around the stage both on his right and left side, before finally left the stage.